London and Beijing to connect through Istanbul 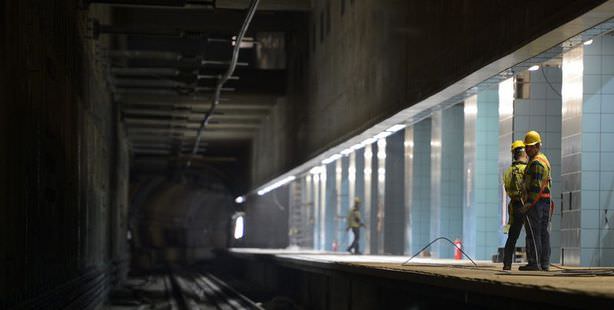 Test drives to begin on August 2nd for the Marmaray Rail Tube Tunnel, which has been a 150-year vision and is planned to be inaugurated by Prime Minister Erdoğan on October 29th of this year, the 90th anniversary of the founding of the Republic of Turkey.

The Marmaray Rail Tube Tunnel project consists of an undersea rail tunnel that will cross under the Bosporus Strait. Regarded as 'the infrastructure project of the century,' Marmaray is a rail transport project for Istanbul which consists of an underwater rail tunnel system that will span 13.6 kilometers long and will be tied to 63 kilometers of suburban train lines which will connect Halkali on the European side with Gebze on the Asian side with an uninterrupted, modern, high-capacity commuter rail system. The 13.6 kilometer section spanning from Ayrılıkçeşme to Kazlıçeşme will be entirely undersea and consists of immersed tubes placed along the base of the Bosphorus Strait.

The "project of the century" which has been 150 years in the making, will be inaugurated along with the Ankara-Istanbul Speed Train by Prime Minister Recep Tayyip Erdoğan on October 29, 2013, the 90th anniversary of the founding of the Republic of Turkey.

For the completion of the Marmaray Project, the immersion tunnels which are located approximately 60 meters under the sea, the rail system installation and the manufacturing of the reinforced cement for the stations are ready. Installation work on the signals and the electro mechanics for the stations continues 24 hours a day.

The total cost of the 13,558 meter tunnel, including 1.387 meters of immersion tubes, the 63 kilometer suburban train line, the third line addition, the renewal of the superstructure and the electro mechanics system as well as the manufacture of railroad cars is expected to reach 9.2 billion liras, 8.1 billions of which has been loaned out.

As for this year's spending, over 36 million will go to engineering and consultancy services, nearly 732 million liras will be allocated for the railway tube straight tunnel, nearly 502 million liras will be spent on renewing the Gebze-Haydarpaşa, Sirkeci-Halkalı Suburban lines and their electro mechanics systems and over 234 million will be spent on the manufacturing of the railroad cars.

The first Marmaray Train will be arriving to the tunnels on August 1st and on August 2nd the test drives and trial runs will begin. After September, a series of potential accident scenarios will be tested n the Marmaray. Once completed, operations will be handed over to the Turkish State Railways. The project aims to provide transportation to 75,000 passengers daily and 1.2 million in a day in just one direction.

A HISTORY OF THE PROJECT

The first time the concept of creating a railroad tunnel to cross undersea in the Bosphorus Strait surfaced was in 1860. Plans were to build a tunnel which would be placed on columns at the bottom of the sea. Similar ideas continued to form in the next 20 to 30 years that followed and in 1902 an official design was drafted. This design foresaw a rail system tunnel that would pass under the Istanbul Straight, however in this design there was mention of a tunnel that would be set up at the bottom of the sea. Since then, there have been a number of ideas and concepts that have been attempted that have turned into new technologies and designs.

In the 1980's the desire to build a public transportation connection that would extend from the East to West in Istanbul under the Bosphorus Strait gained momentum and by 1987 a wide scale feasibility study was conducted. The location and route of the current Marmaray Project was selected amongst a number of other potential routes as a result of this study.

The main outline of the project was prepared in 1987 and in the years that followed so did debate and further studies. During the years 1995 to 1998 another more detailed study was conducted on the project. The new studies reaffirmed previous findings that the project will present a number of advantages to those living and working in Istanbul.

In 1999, the Japan International Cooperation Agency (JICA) signed on to become the main financial source for the project. In 2002, the project's tender was prepared and in 2004 the European Investment Bank also joined in the project. Work on the project began on May 9, 2004.

A trip today from Halkali to Gebze will typically last a bit more than three hours, including the ferry trip from Sirkeci to Haydarpasa. When the upgraded commuter rail system is in place, the trip will take one hour and forty-five minutes. In other words, passengers will save approximately one hour and fifteen minutes on each trip.