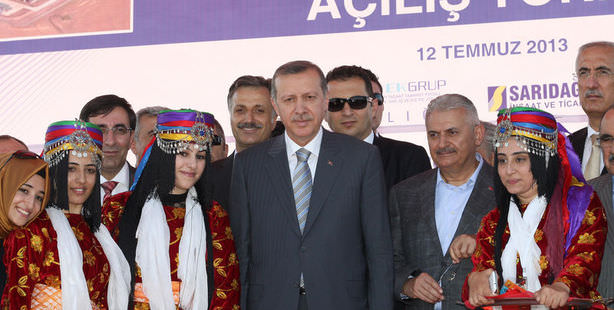 Turkey opened its 51st airport yesterday, in the eastern Anatolian city of Bingöl. Speaking at the inauguration ceremony, Prime Minister Erdoğan stated, “We have development and growth on our agenda and this airport will contribute significantly to this city. The air ways is the path of the public.”

Prime Minister Recep Tayyip Erdoğan conducted the inauguration of Bingöl Airport on Friday. Turkey's 51st Airport was built at a cost of 39 million TL explained Erdoğan who stated, "If ten-and-a-half years ago someone had said 'an airport will be built in Bingöl' would you have believed it? You deserve this."
Prime Minister Erdoğan pointed out that Transportation Minister Binali Yıldırım announced that the inauguration ceremony was being held on the 12th of the holy month of Ramadan, 12 being the provincial code for Bingöl, and said, "During these days of abundance, Bingöl is gaining a very important achievement and we are opening the airport that will connect you with other provinces.

FLIGHTS BEGIN TODAY: Announcing that flights will begin on Saturday, Prime Minister Erdoğan expressed that they were determined to build this magnificent airport, located on a two million square meter area, in a manner that would befit the glory of Bingöl. "Due to this airport more visitors will come to Bingöl in order to witness the sunrise over Karlıova and the swimming island in Solhan. More importantly, more investments will come. This airport will affect the city's industry, trade and development," said Erdoğan. Recep Tayyip Erdoğan

NEXT WEEK IS KASTAMONU: Erdoğan also provided the good news that next week they will be opening up an airport in Kastamonu and then the Friday after that in Şırnak and stated, 'The airways is the path of the public. My brothers in Bingöl will now be able to get on a plane from here and reach Istanbul in an-hour-and-a-half. You deserve the best," said Erdoğan, adding, "The problems that existed ten-and-a-half years ago are no longer."

CONTINUING TO GROW: "Turkey's economy continues its stable growth. In global issues, Turkey remains standing upright without becoming stubborn, and displays an honorable stance. It does not pay heed to the agenda that has been imposed upon it. We have the nation, service, building our cities airports, building roads and residences on our agenda," said Erdoğan.

The 500,000 annual passenger capacity Bingöl Airport was planned with the objective of further developing the city while also taking into account the strategic positioning of the region and its economic and social structure. The highly-awaited Bingöl Airport has officially become Turkey's 51st airport and is located 20 kilometer's distance from the city center.