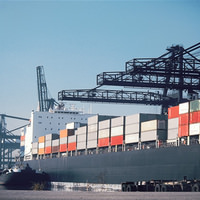 In breaking this year’s monthly export ratings, this July became the best in the republic’s exports history

In breaking this year's monthly export ratings, this July became the best in the republic's exports history. Growing by 17.3% since 2012 exports grew to 12.6 billion dollars. Exports to the in crisis United States grew by 23%.

The Turkish Exports Assembly (TIM in Turkish), announced the export values for July in Çankırı. Exports grew by 17.3% in comparison to last year, reaching a value of 12 billion 629 million dollars. With these figures the monthly export rating records were broken. At the same time this July was the best in the republic's exports history. The exports of the past 7 months reached 87 billion 86 million dollars, while 153 billion 193 million was reached as the 12 month figure. TIM President Mehmet Büyükekşi, stating what made up the economies of global frontrunners said that, "The reduction of exports in the world's 3rd largest exporter Germany, and the 6th largest exporter France along with other main exporting countries is attention catching. Large imports markets, Japan, England, and Canada continue their economic stagnation. Slowing down in China, India, Russia, Mexico and South Africa has also been attention catching."

There is a shrinkage in the world
According to the figures of the past 7 months, there is a 1.5% drop in exports in the top 69 economies excluding China. Brazil's exports suffered by 2.5%, Mexico by 1.3% and the Czech Republic by 3.4%. Where Turkey is concerned exports for the past 7 months rose by 2.9%. Amongst the top 70 economies, Turkey reached the position having the seventh largest export growth.

Automotive ranked first
In July, the automotive sector had the largest exports totaling 1.9 billion dollars. At second 1.6 billion for readymade clothes, and at third the chemicals sector with 1.5 billion.

Translated from an article by Metin Can on SABAH