The Turkish construction sector, building up the world 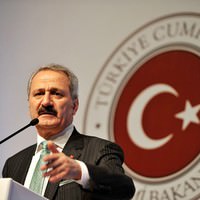 Minister of Economy Caglayan said that the Turkish construction business sector assumed projects in July 40, totalling the value of $2.3 billion

Caglayan stated that the 2 power plants in Turkmenistan were valued at $545 million, 2 hydroelectric power plants had a value of $256 million, the housing project in Kazakhstan carried a cost of $370 million, and 3 projects in Azerbaijan and Kazakhstan having the value of $217 million were some the most important assumed projects by Turkish construction business sector.

"The value of assumed 40 projects in July are more than all the projects assumed in 2001," said Caglayan.

Caglayan said that Turkish construction companies assumed 154 projects in 27 different countries between January-July 2013, adding that, "The value of these assumed projects is around $14 billion."