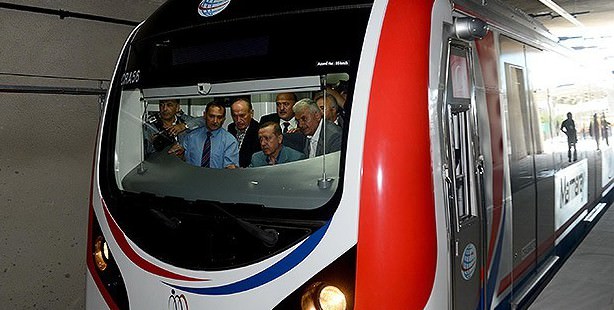 Turkish Prime Minister Recep Tayyip Erdogan referred to the Marmaray Rail Tube Tunnel, an undersea rail tunnel beneath the Istanbul Strait, and said that it was a major project that would connect the Beijing-London line and become integrated with the Kars-Tbilisi-Baku railway line.

Erdogan visited the Ayrilikcesme, a transfer point on the Kartal-Kadikoy tube line of Marmaray Project, on Sunday. Regarded as 'the infrastructure project of the century', Marmaray is a rail transport project in Istanbul which consists of the construction of rail tunnel under sea.

Turkish prime minister stated that the completion day of the project was October 29, 2013. It was planned previously that the inauguration ceremony of Marmaray will be held by Erdogan on October 29, the 90th anniversary of 'The Republic Day of Turkey'.

"75,000 passengers to be transported in one direction in an hour"

Giving details in regards to the project, Erdogan said, at least 75,000 passengers would be transported in one direction in an hour and moreover, trains would be able to be operated every two minutes. "Share of the railways among inter-city transportation of Istanbul will increase from 8 percent to 28 percent," said Erdogan.

Previously being imported from abroad, the trains sets are now being manufactured at Turkish factories in Eskisekir and Adapazari, Erdogan underscored, "We are also working hard to put Eskisehir-Istanbul high-speed train line into application on October 29 too. So, you will take the train from here --Istanbul-- and reach Ankara in 3 - 3.5 hours."

Following his speech, Erdogan carried out the 10 km long test drive between Ayrilikcesme and Yenikapi.

"As you know, archaeological excavations took 5 years of us. However these excavations surfaced the 8,500 years long history of Istanbul. So, Marmaray is not just a project of transportation, its also a project highlighting the historical heritage of Istanbul," said Minister Yildirim.

In addition, Yildirim added, the Marmaray line was 28 kilometres in total with two round-way lines, each being 14 kilometres long.

"A full railway system between Europe and Asia on the axises of North-South and East-West will be installed. The most important feature of the project is that, it's the first project to go deep under the sea that much. Whereas the deepest tube is 40 metres, this one will leave that one behind with 60 metres," said Turkish minister.