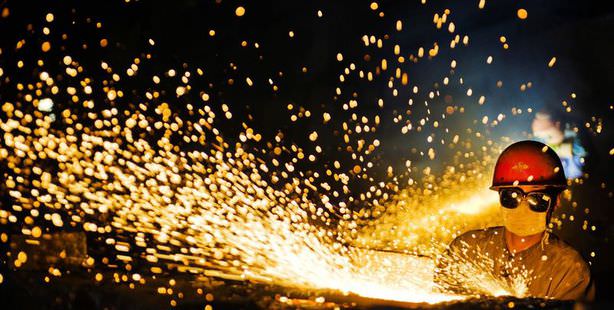 The Turkish Statistical Institute announced on Monday that the Industrial Production Index rose by 5.8 percent in July.

The Turkish Statistical Institute released promising figures for the Industrial Production Index in July on Monday. Capital goods, an indicator of the appetite for investment, saw the most significant rise, which is sending out signals of hope for second quarter economic growth. According to the non-adjusted seasonal figures for July, industrial production rose by 5.8 percent compared to the year prior, which is the fastest rate of growth experienced since November 2012.

Turkey's calendar adjusted industrial production in July rose by 4.6 percent compared to the same month the year prior. At 0.9 percent, this month's increase in industrial production compared to the month prior is the highest rate witnessed since February. These figures for July, which are the first indicators of the third quarter's outlook, shows that Turkey's economic activity is following a positive trend.
Upon closer inspection of subsectors, an increase in production is evident in July in all main sectors except for energy, mining and electricity production. In July 2013, mining and quarrying fell by 2.3%, manufacturing rose by 6.2% and the electricity, gas, steam and air conditioning supply index decreased by 1.6% in July 2013, compared to the same month last year.

The highest production increase at 12.7 percent was seen in the capital goods category, considered to be an indicator of the current appetite for investment. According to seasonally and calendar adjusted data, capital goods is currently experiencing the fastest rise seen since the end of 2011.

MANUFACTURING IS ALSO ON AN UPWARD TREND

Third quarter given a strong start

Economy Minister Zafer Çağlayan: "Industrial production has started off the third quarter well. If figures for August and September continue in this manner, then we will see even better third-quarter growth than expected. The double-digit rise in exports has had a series effect on the industrial production index. With the relative improvement in Europe, our exports to the region will increase."

Domestic and foreign trade will be revitalized

Science, Industry and Technology Minister Nihat Ergün: "Despite the uncertainty experienced throughout the world, Turkey continues to move forward with confident strides. The increase in capital and intermediate goods is indicative that the revitalization of both domestic consumption and foreign trade will continue."