Istanbul to be an important center for global banking and finance 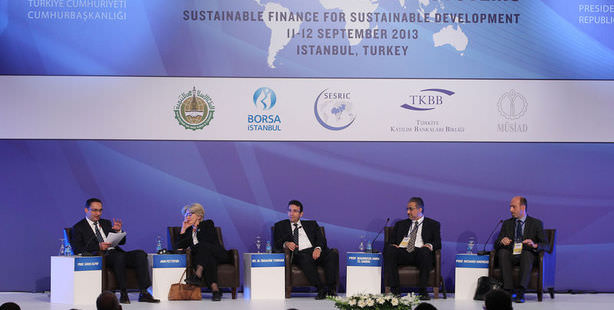 President of the Islamic Development Bank Madani says, “Developing Istanbul to be a kind of gateway for world banking and finance is very important.”

Istanbul is hosting the International Forum on Financial Systems from September 11-12. The forum kicked off on Wednesday with on opening address by President Abdullah Gül, who called for a new global financial system.

Reminding that since the 1980's the world has been on a fast track to globalization, Gül said that the crisis which emerged in the American mortgage sector in 2008 impacted Europe first and then the rest of the world. "Therefore, the states spending large amounts of funds to save the financial system in the beginning, in time themselves began to face crises in their own economies. As we assess the situation, we should be mindful of the fact that the crisis has not yet been overcome completely as global risks and uncertainties continue.

President Gül stated that, "the international economic system seems to almost be acting on a balance of economic terror. It is for this reason that the architecture of the modern financial system is increasingly being questioned. The most important reason of this discussion is that the means and ends have been confused," added Gül.

Highlighting that the fundamental principle of the financial system of raising the prosperity level of societies, has unfortunately been totally disregarded in the process which ended with the 2008 crisis, Gül said, "the structure of the financial system is based on expectations vis a vis the future, instead of real economic value. Financial instruments are not used for creating more employment, prosperity or income, but instead to satisfy the increasing greed on behalf of the financial actors in the system."

"Risk of social unrest is high"

"Almost one billion people face hunger and malnutrition. Unemployment continues to be an increasing problem especially amongst the youth. There has been a significant decrease in the disposable income that people have. As a result, life has become much more difficult for an ordinary person," said Gül. "Under these circumstances, the risk of social unrest is high. If such structural problems in the international system cannot be resolved, the impact of the crisis could have impacts on the fabric of societies."

Gül pointed out that all of these factors make it necessary to come up with new global mechanisms and instruments which would reorganize the financial structure and stated, "There is a need for a new regulation appealing to the interests of all actors, including developing countries."

Gül noted that the new financial structure must also take into consideration the need of developing countries within the global economy and therefore the G-20 was a very important platform and said, "Turkey is an active member of the G-20 and will continue to contribute to these efforts. As the international financial architecture is restructured, it is also very important to support alternative approaches," he added.

Istanbul to be a global finance center

President of the Islamic Development Bank (IDB) Mohammed Ali Madani spoke to reporters following the opening session of the forum on Wednesday, during which he stated, "Developing Istanbul to be kind of a gateway for world banking and finance is very important."

Stating that Turkey's role was very significant for the economy of the Muslim world, Madani said "The idea of developing Istanbul to be a kind of a gateway for world banking and finance is especially very important". Reminding that IDB will be opening an office in Istanbul in the upcoming week, Madani said, "We expect more investors to come to Istanbul and benefit from the institutions to be established in the city."