Turkey embarks on a new era of joint trade with the U.S. 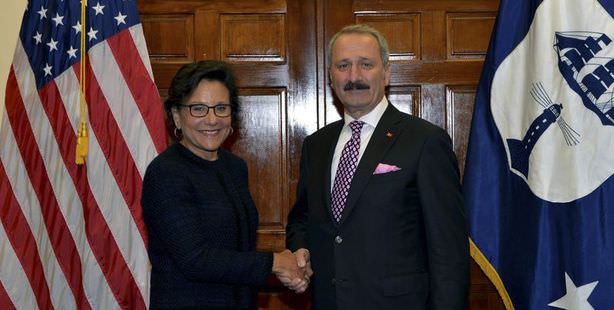 Economy Minister Çağlayan has announced that a High Level Business Committee between Turkey and the United States has now gone into effect during his trip to Washington and added, “These meetings may end up with Turkey being included in a Free Trade Agreement.”

The High Level Business Committee, upheld between the U.S. and Turkey and tasked with negotiating a Turkey-U.S Free Trade Agreement held its first meeting in Washington. During the meeting, both sides expressed their expectations regarding the Free Trade Agreement and reached an agreement on the method of their efforts to be followed.

THE EU IS NOT GENTLEMANLY

Meeting with both U.S. Minister of Trade Penny Pritzker and U.S. Trade Representative Michael Froman in Washington, Economy Minister Zafer Çağlayan stated on Tuesday, "We presented our work program to the U.S. Trade Representative and they will complete their efforts by the end of this month after which they will relay their progress to us. Today is a historical day for Turkey-U.S. trade," said Çağlayan.

Noting that the committee has been tasked with conducting an analysis of nations that could be involved in a Free Trade Agreement between turkey and the U.S., Çağlayan stated, "The committee will also determine how Turkey will be affected by the Transatlantic Trade and Investment Partnership (TTIP) signed between the European Union and the U.S."

Çağlayan accused the EU of not being 'gentlemanly' by failing to include Turkey in negotiations on the transatlantic agreement and stated. "If the EU had acted gentlemanly on the issue they would have said, 'Turkey is our partner." The Economy Minister also commented on the tough visa regulations for Turkish businesspersons, which he qualified as a violation of human rights and suggested that Turkey should implement the same restrictions.

Pointing out that Turkey and the U.S. are strategic allies; Çağlayan stated that unfortunately this is not reflected on the joint trade volume between the nations. "Our trade volume is far from representative of this alliance. Last year we had a 19.7 billion dollar trade volume. Out of this figure, 5.6 billion were our exports. The remaining 14.1 billion dollars consists solely of the United States' exports to Turkey," said Çağlayan.

During his meetings held in Washington, Çağlayan also noted that he brought up the issue of high taxation implemented by the U.S. on exports from Turkey. At present, the U.S. implements five trade policy measures on Turkey-originated goods by way of issuing three anti-dumping and two compensatory taxes. In addition, the U.S. implements two compensatory taxes on Turkey alone. Çağlayan pointed out that steel petroleum pipes and construction iron are also subjected to these taxes and stated that they informed the U.S. that these measures are resulting in a serious trade gap between the nations. The

Economy Minister also added that certain fruits such as black figs and pomegranates have been unable to enter the U.S. market and stated that he requested U.S. officials lift the prohibitive measures. Minister Çağlayan noted that political issues were not tackled during these meetings, "However" he said, "economy is the key to politics. The strong relations business relations between the two countries will only strengthen their political ties that much further."