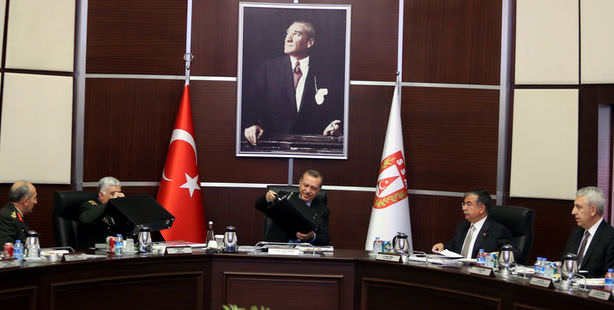 During a defense industry executive committee meeting held on Thursday and chaired by Prime Minister Erdoğan, it was announced that China was the winner of a tender held for Turkey’s long range air and missile defense system.

Chaired by Prime Minister Recep Tayyip Erdoğan, the Defense Industry Executive Committee convened on Thursday for a three-hour meeting in which a tender, won by China, for Turkey's newest long-range air and missile defense system was the main topic of discussion. Joining Erdoğan for yesterday's meeting was Chief of General Staff Gen. Necdet Özel, Minister of National Defense İsmet Yılmaz, Defense Industry Undersecretary Murad Bayar in addition to a number of other high-level officials.

CHINA, LEAVES NATO ALLIES RUSSIA AND THE U.S. IN ITS WAKE

The Chinese corporation CPMIEC (China Precision Machinery Export-Import Corp.) won the tender for its FD-2000 missile system, which will be co-produced with Turkey. At the Defense Industry Executive Council Meeting on Thursday, it was decided that contract negotiations will begin within the framework for the long range air and missile defense system to be jointly produced by CPMIEC in Turkey. China's FD-2000 competed against Russian firm Rosoboronexport' S-400, the U.S. partnership of Raytheon and Lockheed Martin for the Patriot air defense system and the Italian-French consortium Eurosam's Samp-T.

China's long-range missile and air defense system the FD-2000, which has the capability for vertical launching, is positioned on a duo and six-set of batteries. The missile also has a 20,000 meter elevation and 100 kilometer range capacity.

The Turkish Armed Forces (TAF) does not currently have a long-range missile and air defense system in its inventory. Turkey presently counters its short-range air defense with the Rapier and the pedestal mounted Stinger missile batteries. TAF operates a modernized I-Hawk missile system for its mid-range air defense necessities.

While the decision to grant the tender to China is being qualified as a surprise, it is also being stated that the collaboration with China in this area could be considered a change in doctrine in defense.

During the meeting, it was also decided to begin negotiations on a contract for serial production of the TUSAŞ and FREE BIRD (HÜRKUŞ) to supply 15 new generation training planes for the Turkish Air Forces Command. An announcement was also made regarding Turkey's national battleship project (MİLGEM), in which a the previous tender which went to Koç Group has been canceled, that the remaining third and fourth ships will be built by the Istanbul Naval Shipyard Command. It was also stated that a new tender will be held for the project's remaining four ships.