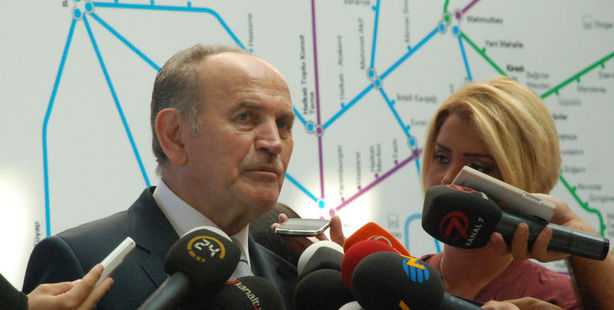 Istanbul Mayor Topbaş revealed plans to increase metro lines throughout the city in a move he says will allow Istanbul to reach a whole new league, stating, “In 2019, we will become the second in the world after New York to have the largest network of metro lines.”

As the Istanbul Metropolitan Municipality continues to put a new public transportation project into effect annually, plans to enhance the city's metro lines will carry Istanbul into the league of other major global metropolises. Speaking at a meeting to announce the investments being made into Istanbul's rail system, Istanbul Metropolitan Municipal Mayor Kadir Topbaş expressed on Friday that they are working on bringing the world's most modern and technologically advanced metro systems to the city. Explaining that New York currently holds the record for being the city with the most expansive metro lines which span approximately 800 kilometers throughout the U.S. city, Topbaş stated, "After 2019, Istanbul will become the world's second city after New York to have the longest metro network. This is not just a dream. We are putting this project into effect step by step," stated Topbaş.

METRO LINES TO BE BUILT IN EVERY DISTRICT

Pointing out that metro lines provide transportation for 50,000-70,000 people hourly, Topbaş stated, "Practically everyone will be in walking distance to a metro line. This not just a dream, it is a project. There will not be any district in Istanbul that will not have a metro line."

Topbaş explained that when they first came to duty, there was only a 45 kilometer-long metro line in the city, and stated, "2016 will be a turning point for the city. Seven million people will be using the metro daily. By 2019, 11 million people in Istanbul will have the opportunity to ride metro lines. The year 2019 will truly be our peak era. Once we have realized our later projects and have reached 775 kilometers, we will have the type of city where everyone can exist enjoyably and without transportation issues," said Topbaş, adding that it will be the Istanbul will be the envy of the world.

Plans are to increase the distance covered by metro lines in Istanbul up to 400 kilometers between the years of 2014 to 2019. The Yenikapı-Aksaray metro line will go into service in 2014. By 2015, it is anticipated that the Kartal-Kaynarca, Üsküdar-Ümraniye- Çekmeköy-Sancaktepe, Levent-Rumeli Hisarüstü and Mecidiyeköy-Zincirlikuyu-Altunizade- Çamlıca aerial railways lines will be in operation. By 2019, plans are for rail transportation to also be provided from Sabiha Gökçen Airport to Pendik, Yenikapı to İncirli, Halkalı to Arnavutköy to the third airport.