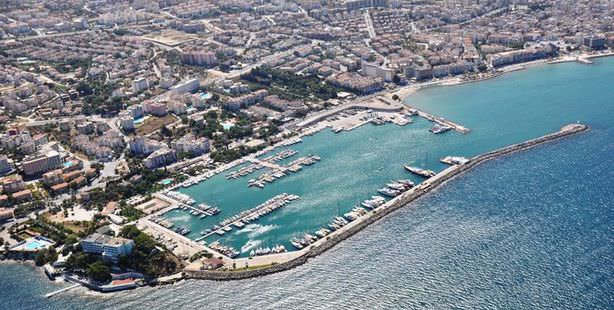 Transport Minister Yıldırım announced on Wednesday that the government is planning to launch tenders for four new yacht marinas soon. A total 1,525 yachts will be able to anchor at the four new marinas planned for Balıkesir, Tekirdağ, Çeşme and Silivri.

Transport, Maritime and Communications Minister Binali Yıldırım announced plans to launch tenders for four additional yacht marinas, which will bring Turkey's total berth capacity up to 19,000. "We will be building a total of four marinas in Balıkesir, Tekirdağ, Çeşme's Şifne and Silivri, Istanbul, which will have a 1,525 berth capacity. As a result, Turkey's total berth capacity in its yacht marinas will rise to 19,000.
Yıldırım noted that there are currently 43 yacht marinas and yacht slipways both privately and publicly operated in Turkey and stated that with the inclusion of the Balıkesir Avşa Adası Türkeli Yacht Marina, the Tekirdağ Yacht Marina, the Çeşme Şifne Yacht Marina and the Silivri Yacht Marina, which he said will be launched as tenders soon, the total number of marinas in the country will reach 47.

TURKEY IS A CENTER OF ATTRACTION

Minister Yıldırım pointed out that there are over one million yachts traversing the Mediterranean basin and that 75 of those are docked at marinas in France, Spain and Italy and said, "The fact that new investment locations are limited in these countries coupled by the increased pollution of the Western Mediterranean and also due in part to the increase in operation charges Eastern Mediterranean nations, and of course Turkey from a yacht tourism perspective, have become a center of attraction." Yıldırım explained that as a result, they have placed heavy importance on marina investments over the past ten years. Stating that over the past decade they have increased the country's previous 9,000 berth capacity to 17,500, Yıldırım said, "Despite having a long coastal strip, there are not enough marinas. With the ongoing current construction of a number of marinas as well as the marinas planned, we will be bringing this capacity up to 20,000 in 2015 and up to 30,000 by the year 2023"

NUMBER OF MARINAS ON THE RISE

Sharing the information that the new marinas will be constructed with the build-operate-transfer method, Yıldırım stated: "Up until 2003, there had only been one project completed under the build-operate-transfer method. Today, we have eight yacht marinas, in Muğla's Turgutreis, Aydın's Didim, İzmir's Çeşme and Sığacık, Yalova, Mersin, Antalya and Alanya for which the constructed has been completed under this model and they are now in operation. Meanwhile, the construction on Antalya's Gazipaşa, Mersin's Kumkuyu and Muğla's Ören, Datça and Dalaman marinas continues."