Turkey in demand of oil from Iraq 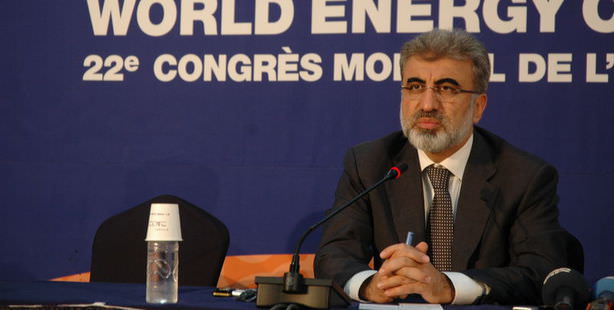 Energy and Natural Resources Minister Taner Yıldız says Turkey would be open to purchasing oil produced and exported from Iraq and said that at present they are unable to further cut gas purchases from Iran.

Energy and Natural Resources Minister Taner Yıldız held a press conference on the sidelines of the 22nd World Energy Congress held in South Korea. Responding to reporters' questions on oil purchases from Iran and Iraq, Energy Minister Yıldız stated that Iran is a serious supplier for Turkey's oil and natural gas demands and said that as a result they cannot decrease their oil purchases from Iran. "I must say that from here on out we cannot make further cuts because we are at the saturation point," said Yıldız. Noting that Turkey acquires nearly five million tons of crude oil annually from Iran at present, Yıldız stated, "We do not foresee decreasing this amount in the future because it will put Turkey's security of supply in distress. Everyone can appreciate that Turkey's needs and growth are important for us. We have made certain cuts up until now, however we are no longer able to make any further. This is due to the fact that this is one of the points where the bitumen needed for asphalt is procured," said Yıldız adding that Turkey's needs for building double highways, which surpasses 16,000 kilometers at present will only increase. "Therefore, we cannot drop this figure any lower," stated the Energy Minister.

"WE ARE AT THE LIMIT"

Emphasizing that when it comes to Iran, UN rulings are binding for Turkey, Yıldız stated, "Of course we will follow the decisions made by our model partner, however Turkey's needs must also be understandable. Turkey is not a country that operates on the same figures from ten years ago.

Expressing that more so than sanctions, there is a need for a liberalized economy; Yıldız pointed out that Turkey is at its limit in regards to further oil supply from Iran. "It is our duty to consider our citizens and our internal demands," stated Energy Minister Yıldız, who also emphasized that tension is not sustainable in relations between nations.

OIL PURCHASES FROM IRAN AND IRAQ

Responding to a question regarding developments on natural gas imports from Iraq and Iran, Minister Yıldız stated that there may be proposals and demands made regarding acquiring any form of product pertaining to natural gas and crude oil that can be produced by Iraq. "As a fellow and neighboring nation, Iraq is one of our biggest gas suppliers. We are hoping to continue this increasingly. Turkey will be a customer for natural gas that can be produced and exported from Iraq. We have a contract with Iran for nearly ten billion cubic meters, making Iran one of Turkey's largest suppliers. We are extremely pleased with this exchange and we have very good relations with them in terms of supplying the nation's needs. I must also express that if there is talk of increased natural gas then we would be open to proposals," said Yıldız.

When asked to comment on Turkey's nuclear power plant projects and more specifically whether there would be any delay in Turkey's first nuclear power plant, Energy Minister Yıldız reminded that he had explained from the very start that at times due to threats or other opportunities there can be delays in projects of this scale that involve various organizations. Yıldız pointed out that after what happened at Fukushima they have wanted all security-related systems to be implemented at an even higher level, which is being positively assessed, and stated, "At present there does not appear to be any sort of foreseen delay involving the purchasing periods for the operation. There is also no foreseen delay in the nuclear power plant we will be building with Japan. "From time to time, we may see that work is being expedited and slowed down. There will also be reasons for a number of these situations, however there will be no interruption in terms of our determination when it comes to nuclear power. We are continuing our efforts and are working intensively," stated Yıldız.

Asked to comment on a statement made by Electricity Distribution Services Foundation (ELDER) Executive Board Chairman Nihat Özdemir, who said that a Turkish company may be in line to build Turkey's third nuclear power plant. Yıldız stated that this was an appropriate assessment. Explaining that they may evaluate proposals by domestic partners of the project firm, the same of which can be said for the second nuclear power plant, Yıldız stated, "This culture needs to be established. All efforts regarding construction and domestic production needs to be able to be realized in Turkey. We can succeed in doing this with domestic partners and entrepreneurs as well as in the public and private sectors. This may be a period that takes decades, however we need to become a country whose technology and industry is more advanced and one that faces no difficulties in terms of security of supply. This is why we are working on these issues."

Yıldız thanked South Korea for hosting the World Energy Congress, which he referred to as the "energy Olympics." Reminding that Turkey is set to chair a meeting of the International Energy Agency in Paris next month; Yıldız stated that it was prestigious for Turkey to chair a meeting, which will be attended by 28 different nations.