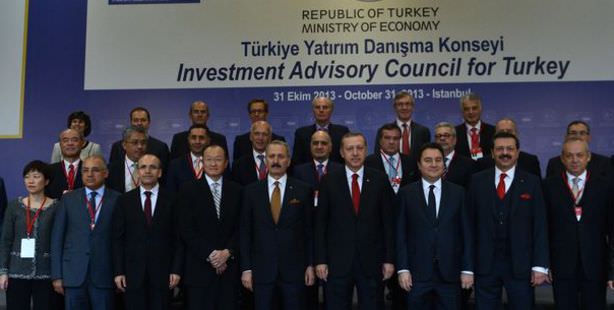 Sixteen major multinational corporations, which post a combined 562 billion dollars convened in Istanbul to attend the eighth Investment Advisory Council held in Istanbul. Emphasizing Turkey’s economic stability, Prime Minister Erdoğan stated, “We used to continuously print money. We would go to sleep at night and wake up with an additional zero on our currency. We have now established fiscal discipline.”

Istanbul was host to the eighth annual Investment Advisory Council, which brought together the CEO's of 16 mega multinational corporations that post over 562 billion dollars in funds, to discuss upcoming projects in areas spanning from power plants, speed trains, telecommunications, energy and transportation. American energy firm Allied has announced plans to make a four billion dollar investment in Turkey, while Medtronic, the sole medical firm in attendance, also signaled signs of a potential investment.

Turkey has now become a regional administrative center for global-scale firms, stated Prime Minister Erdoğan, adding that plans are to set up logistics centers in 18 locations including Eskişehir, Samsun, Konya, Mardin, Erzurum, Kars and Sivas. Noting that they have never allowed for an election economy to take hold over the past 11 years, Erdoğan stated, "We have never pursued a path of veering from economic discipline."

WE HAVE ENSURED FISCAL DISCIPLINE

Emphasizing that Turkey has achieved stability, Prime Minister Erdoğan stated, "In the past, the average election period lasted 16 months. Every election also brought on populist economic policies. The Central Bank continuously printed money. There used to be six zeroes next to a one… We have facilitated fiscal discipline," emphasized Erdoğan.

Economy Minister Zafer Çağlayan commented on plans by American energy firm Allied to invest four billion dollars in Turkey by stating, "They will be acquiring chemicals from coal. They will be producing in areas, such as urea and ammoniac, that Turkey is forced to import in." Çağlayan also noted that they will soon be laying the foundation for a partnership between a domestic and foreign firm that will produce Dunlop tires.

Alstom to invest in energy

Alstom CEO Patrick Kron expressed an interest in a speed train tender and supplying the turbines for a nuclear power plant project. Pointing out that Alstom produces one-third of the nuclear turbines in the world, Kron stated, "We are planning to partner up with a Turkish firm to manufacture train spark plug chassis."

"We want to be a part of the solution"

Omar Ishrak, the CEO of the sole medical firm which participated in the council, Medtronic stated, "The investments we have made in Turkey and the Middle East and Africa regions, shows the importance we place on this region. We hope to be a part of the solution by collaborating with governments through meetings such as these."