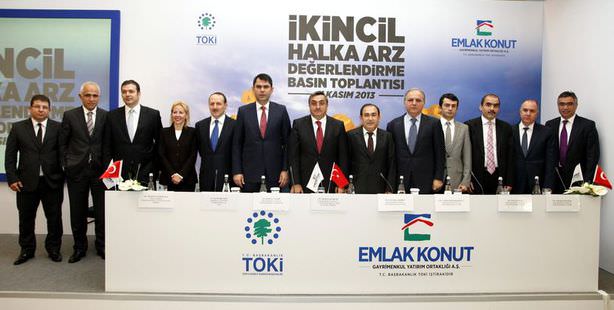 Foreign investors with instilled trust in Turkey flocked to take part in Turkish real estate firm Emlak Konut GYO’s secondary share offer in Monday, making it one of the largest listings on the Istanbul Stock Exchange and the biggest real estate public offering in Europe in the past five years.

Turkish real estate firm Emlak Konut GYO raised 3.25 billion liras after receiving record demand for a three-day share offer on the Istanbul Stock Exchange. Foreign investors rained in requests for the secondary share offer, which saw demand soaring over 2.3 times the size of the listing, making it not only one of the largest public offerings to take place in the Istanbul Stock Exchange, but also the biggest real estate public listing to take place in Europe in five years. With 80 percent of shares sold to foreign investors for 2.5 liras each, the company managed to rake in 3.25 billion liras, it announced on Monday. Ninety-seven percent of the demand that came in from 104 investors from 20 different nations, was met over the three-day share offer.

Emlak Konut received 6.355 billion liras in demand for their secondary public offering to sell 3.25 billion liras of shares. Over the three days, 104 foreign investors offered 5.120 billion liras while domestic investors put up 1.235 billion liras for shares. The entire 1.3 billion TL nominal value shares offered in the public listing were met by demand. Out of the shares allocated, 80 percent went to foreign corporate investors, while ten percent each went to domestic independent and corporate investors, respectively. Halk Yatırım, the brokers of the mega real estate firm offering says that the trust exhibited in Turkey's economy was an influential factor as was the share price being set at 2.50 liras, which was a ten percent reduction. After transactions, the free float rate for Emlak Konut has now risen to 50.66 percent. Turkish investors also exhibited interest in the share offer, with a total 650 million liras worth going to Turkish investors, 249 of which went to corporate investors and 14,599 of which went to independent investors.

A total 97 foreign investors, with a number from the United States, England and the Middle East, purchased 2.6 billion liras worth of shares. Fifty of these investors, which also included international funds, were first time investors in Turkey, making the purchase of Emlak Konut Shares their entrance to the Istanbul Stock Exchange. Forty-nine percent of the foreign investors were from the United States, while 29 percent were from England. Overall, demand came in from 20 different countries explains Emlak Konut General Manager Murat Kurum. "We have met with foreign investors from a variety of geographies such as America, England, Canada, Germany, France, the Middle East, South Africa, Holland, Austria, Sweden, Switzerland and Singapore. This is an indicator of the trust in our firm and in Turkey," stated Kurum.

WE COULD PURCHASE A 30 BILLION TL PROPERTY

The offering, which had trading scheduled to start on November 12, raises the firm's paid-in capital from 2.5 billion liras to 3.8 billion. Emlak Konut Administrative Board Member Veysel Ekmen says that there is an additional approximately 1.5 billion in cash to come in addition to the 3.25 billion lira share offering. "If we were to do no business at all, we still have 3.5 billion TL for the years to come. This makes a total of nearly nine to ten billion TL. With these funds, one could purchase property at three times the value. In other words, we have a 20-30 billion TL budget," stated Ekmen.

A letter of trust from the USA

During the press conference held for Monday's announcement of the final results of the public offering, Emlak Konut General Manager Murat Kurum shared a quote from a letter of trust he had received from a major large corporate investor from the U.S. According to Kurum, the letter read, "We are an establishment that likes to invest in firms with senior management and authorized executive boards that offer their shareholders full trust and that impeccably implement their business plans. You are in the front row when it comes to this category."