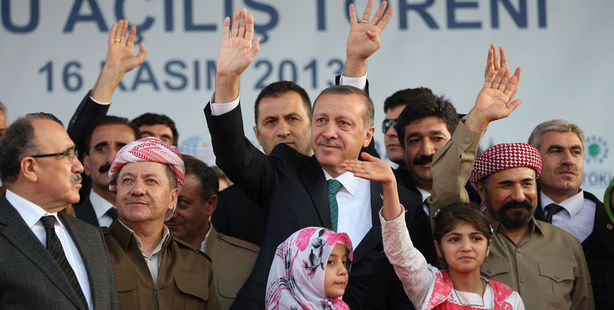 Prime Minister Tayyip Erdoğan was joined by the leader of the regional administration in Northern Iraq Masoud Barzani on Saturday in Diyarbakır for a joint opening ceremony for 1,300 facilities that totaled 740 million liras in investments. On Sunday, Erdoğan attended openings in Bismil and Ergani, which brought the weekend’s total to 880 million liras worth of investments that were opened to operations.

Prime Minister Recep Tayyip Erdoğan was joined by the leader of the Northern Iraq Kurdish Regional Government Masoud Barzani for a momentous opening ceremony on Saturday in the southeastern province of Diyarbakır. A total 1,3000 facilities were included in the joint opening ceremony held at the Kantar Köprülü Kavşağı. In an address to crowds that came out to witness the historic event, Erdoğan stated, "We are gaining Diyarbakir 740 million liras in investments. Tomorrow, we will head to Bismil, after which we will go to Ergani. With the total number of facilities we will be opening over the weekend, Diyarbakir will have acquired 880 million liras in investments."

Prime Minister Erdoğan also announced to the crowds that they have made an 18 million-lira investment in Dicle University and went on to state, "Our Transportation Ministry has built six bridged intersections. The Diyarbakır-Siverek road is finished. Our Ministry of Agriculture has completed a 168 million-lira investment. The National Education Ministry has constructed 265 classrooms, two dormitories and a sports center. In addition, the Forestry and Water Works, Youth and Sports, Culture and Tourism, Energy and Natural Resources, Development, Interior Affairs, Family and Social Policies, Labor and Social Security, Science and Industry Ministries have made a variety of efforts they have brought on to Diyarbakir."

BARZANI ARRIVED WITH A DEVELOPMENT PLAN

Masoud Barzani, whose arrival to Diyarbakır marked the first in 21 years, brought along with him a 2013-2020 Development plan. Barzani has plans to initiate billion dollar investments in the region, for which he would like to give priority to Turkish firms. Barzani is especially interested in realizing collaborations in the construction and energy arenas. Northern Iraq's Kurdish Regional Government leader Masoud Barzani is expecting this trip to result in an economic step being taken of the likes that will change the destiny of the region. Also on the agenda is establishing a free trade zone, which up until now was an impossibility due to security concerns in the region.

This is a translation of an article originally written by Hazal Ateş and Mehmet Ali Berber.