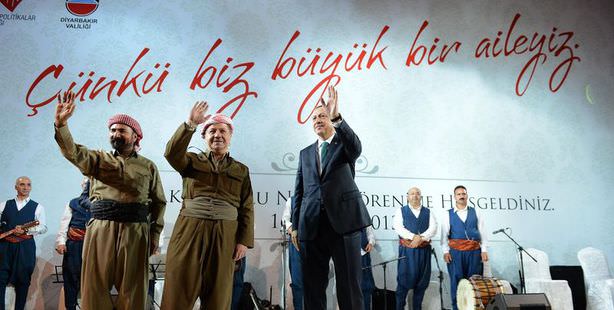 The Organization for Economic Cooperation and Development has included coverage of Turkey’s resolution process to resolve the decades-long Kurdish issue in their November 2013 economic outlook report released on Tuesday. According to the OECD, the government’s initiative efforts to decrease internal political tension will encourage growth for the nation.

The momentous November 16 meeting which brought Prime Minister Recep Tayyip Erdoğan and the Northern Iraq Regional Administration leader Masoud Barzani together along with legendary musicians Şivan Perwer and İbrahim Tatlısesin Turkey's southeastern province of Diyarbakir continues to be echoed. The latest praise for the state's efforts to put an end to the decades-long Kurdish issue through a resolution process was made by the Organization for Economic Cooperation and Development (OECD).

TRUST WILL BE A POSITIVE INFLUENCE

The OECD's 2013 November Economic Outlook Report released on Tuesday provided ample coverage of the Kurdish initiative, the positive effects of which it states will result in an anticipated four percent growth in 2014-2015. The report draws attention to the perpetuating geopolitical tension in the region and states that the government's latest efforts geared towards decreasing the internal political tension, may result in a more powerful improvement, and increase in trust and growth than foreseen in the Euro Zone.
The report points out that growth, driven by a surge in public infrastructure and robust private consumption, strengthened in the first half of the year. Due to the positive effects, the OECD has upwardly revised its 2013 growth forces for Turkey, which was initially made in May, from 3.1 percent up to 3.6 percent.

THERE WILL BE A RISE IN EXPORTS

The OECD had forecast Turkey's growth at 4.6 percent in their report released in May, however in November they have revised their growth estimation to 3.8 percent. In 2015, the organization anticipates 4.1 percent growth for Turkey. The report states, "Since May, international capital market turbulence has pushed interest rates up and the exchange rate down. Financing and credit conditions nonetheless remain supportive and export growth should increase as global demand recovers." The OECD report announced their forecast that approximately four percent growth is estimated for Turkey in 2014 and 2015.

GLOBAL ECONOMY TO GROW BY 2.7 PERCENT