Why should Turkey’s rating immediately be raised? 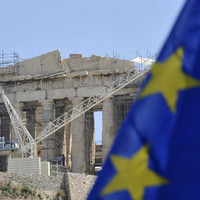 As for the reasoning behind the increased rating, the credit agency said although the politically unstable country shall shrink by 0.5 percent and is in economic recession, it had achieved a primary surplus.

So with the rating upgrade, where does Greece stand now?
You won't believe it but now Greece is positioned just two degrees below Turkey. Greece had a C rating, or in other words a junk rating and climbed two degrees to Caa3 with a stable outlook, which means it's still in high-risk territory. In that aspect, last week the OECD announced that despite shrinking continuously for the past seven years and receiving 240 billion dollars in aid, Greece required yet another aid package. It was also announced that instead of the predicted 120 percent the public debt in 2020, the rate will be at 160 percent.

Now let's get to why we are examining Greece's rating...
We are not against the raise in Greece's rating. If these ratings are given based on strong financial realities, what is Turkey's crime? Why do they still keep Turkey's rating at the lowest possible investment grade, Baa3, with a stable outlook? Placing Greece, in this economic state, just two tiers bellow Turkey does Turkey great injustice.

Because Turkey's budgetary deficit stands at 1.2 percent of the GDP, and the public debt stands at 35 percent. Moreover, the country will post a 0.9 percent primary surplus this year, decreasing its debt burden. Turkey is once again to grow by 3.8 to 4 percent this year and next. But despite all these positive factors, Turkey's rating does not improve.


Well, then why does Turkey's rating not improve?
It doesn't increase because there is a desire for shrinking global capital flows to go to economically troubled nations within the EU, Portugal, Spain, Ireland, Greece and South Cyprus. Alas for this reason, while the ratings of these bankrupt countries increases, Turkey's does not.

The entry of foreign investments is being blocked.
Due to this a high interest trap is being set. There is no doubt the ones setting this trap are the interest lobbies. Because they are working from outside and within to keep Turkey's rating put. Let's give a quick example: In the November 26th of the International New York Times, an investment firm named Japonica Partners placed a full page ad headlined "Greece A+".

This advertisement was explaining how strong the public finances of Greece were. In other words, they wanted to depict Greece, which has a 170 percent public debt and has been unable to grow, as a strong economy, thus improving its rating. They managed to get what they wanted. Three days after the advert Moody's raised Greece's score.

Now this question must be asked:
With Turkey having a stronger public finance performance and growth than A rated Poland, why haven't Istanbul-based capital investors placed "raise our rating" adverts? If you are earning money from Turkey, then you must defend the rights of this country.

Thus, we are expecting "Turkey A+" adds from those Istanbul investors.