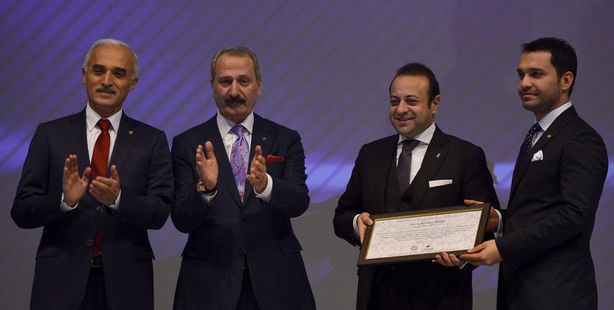 European Union Minister Egemen Bağış attributed the recent Visa Exemption Readmission Agreement as being due to the success of Turkey’s business world and said, “Those who dragged us up a mountain are now stuck up there. It is now time for the EU to make considerations.”

The new Visa Exemption Readmission Agreement reached with the EU, which will grant Turkish citizens visa liberalization in three-and-a-half years is high on the agenda of Turkey's business world. Attributing the success of this agreement to Turkish businesspersons who have faced difficulties passing through EU doors in order to conduct business, EU Minister and Chief Negotiator Egemen Bağış stated, "We have worked together for years. This is a success acquired by our businesspersons' associations and especially that of the Independent Industrialists and Businessmen's Association (MÜSİAD). However, the true architect of this new era is our prime minister who gave us the order to stand up tall without being stubborn."

'THEY DRAGGED US UP A MOUNTAIN'

The Fourth International Young Businessmen's Congress held by the Independent Industrialists and Businessmen's Association (MÜSİAD) at the Haliç Congress Center commenced on Friday. Delivering the opening address, Bağış expressed that those who dragged us up a mountain are now stuck up there themselves and stated, "When it comes to lifting visas, we have gotten the visa. Europeans are now also beginning to realize things. A statement once made by a former Christian Democrat Bavarian President, who said, 'If Turkey does not become a member of the European Union in the next 15 to 20 years, both the French President and the German Chancellor will reach a point of getting down on their knees to beg Turkey to be a member,' is the greatest proof of this success. "We have brought the EU onto their knees when it comes to this issue."

Addressing the congress, MÜSİAD President Nail Olpak stated that the greatest wealth of the geography Turkey is a part of is not its underground riches, but is in fact its youth. "This is where our strength lies and this is our area of investment. "Addressing young MÜSİAD members at the Congress entitled "Sustenance and Risk Dichotomy in the Business world", Olpak pointed out that during the 2008 crisis, developed nations were especially unable to balance out the dichotomy of risk and sustenance. The transfer of risk by global actors becomes a wheel that consistently nourishes a crisis. The financial system has not been established to provide sustenance but instead is a spiral that has risk upon risk ride on it in order to create derivative assets. This has in turn transformed into a system unable to directly manage risk. MÜSİAD's advantage is that it is an organization of virtuous individuals."

'WE ARE NOT KNOCKING ON ANYONE'S DOORS FOR BREAD'

Minister Çağlayan also addressed the recent development regarding EU visa exemption for Turks, by stating, "When it comes to the EU issue, this is no longer the Turkey it once was. This is an entirely new Turkey. Turks are no longer going to Europe to work or to find bread. No longer are people seeking shelter in Europe due to their ethnic roots and beliefs. A Turkey such as this is an advantage for the EU."