Turkey received what it wanted from TANAP 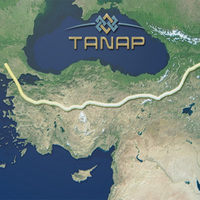 The President of the National Azerbaijan Petrol company, Rovnak Abdullayev announced that Turkey’s shares from the Trans Anatolian Gas Pipeline would be raised to 30%.

Speaking on a local television channel, Abdullayev said, "President Ilham Aliyev has welcomingly avvepted Turkey's request and through his orders the Turkish shares from the pipline will be raised by 10 percent becoming 30 percent. The documents regarding this are being prepared" in context to the requests of Turkish officials for a raise in the country's shares.

On the other hand, the APA news agency announced that the French and Norwegian petrol componies "Total" and "Statoil" abstained from obtaining shares.

Statoil had wanted to obtain a 12 percent share, while Total desired 5, but then decided against it due to the rise in value of the shares.

After the raise in Turkish shares, the shares of the pipeline will be split 30 to 70 between Turkey and Azerbaijan.

Taner Yildiz, the Minister of Energy and Natural resources, had attended the European investors meeting for the Trans Adriatic Pipline (TAP), that will carry the natural gas from the region to Europe, and requested the increase in Turkish shares.