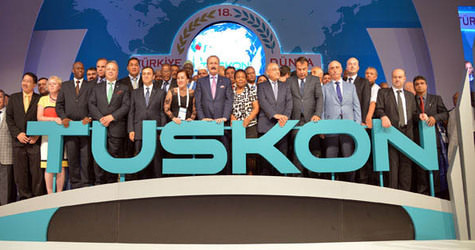 TUSKON’s support of the coup attempt against the government resulted in resignations from the confederation.

Having more than 300 associations and 55,000 members, TUSKON (the Turkish Confederation of Businessmen and Industrialists) started to weaken after the Dec. 17 operations. Many businessmen, who are not affiliated with the Gulen Movement, became members of TUSKON to keep up with commercial activities. TUSKON's support of the black propaganda against the government on Dec. 17 expedited resignations from the confederation. TUSKON's failure to meet the commercial expectations of these businessmen is also a concern.

Medium-sized companies stated that TUSKON was not objective and that only the followers of the movement were included in major agreements. "The coup attempt against the AK Party government is also another disturbing factor. So, we decided to resign," they explained.

Tax audit experts began auditing three groups owned by the Boydak Group. Boydak Group, one of Turkey's largest holdings is also a member of TUSKON. Boydak Holding CEO Sukru Boydak is in the board of directors of the confederation.

Gulenist businessmen initially started to network under the Business Life Cooperation Association (ISHAD) and the Free Industrialists and Businessmen's Association in 1993. These associations then founded TUSKON in 2005, which incorporates seven federations, 211 businessmen and 55,000 entrepreneurs across the country. There are representative offices in Brussels, Washington DC, Moscow, Beijing and Addis Ababa along with 140 other partners.

On the other hand, followers of the movement have started to resign from the pro-government organization, MUSIAD (Independent Industrialists and Businessmen's Association).

TUSKON's anti-government propaganda is an attack on the democratic steps taken by the party to restructure the judiciary through amendments to the Supreme Board of Judges and Prosecutors (HSYK). In their written statement, the confederation claimed that the proposed amendments to reform the structure of HSYK is an act of disrespect against the national will and the decision is in conflict with the 2010 referendum. They also supported the corruption and bribery operations that have targeted the sons of three, now resigned, ministers along with around 80 businessmen and civil servants. "Bribery in government agencies is like a tumor in the human body. In the context of a nation, if not prevented by taking timely precautions, it spreads and subverts the country," they stated.