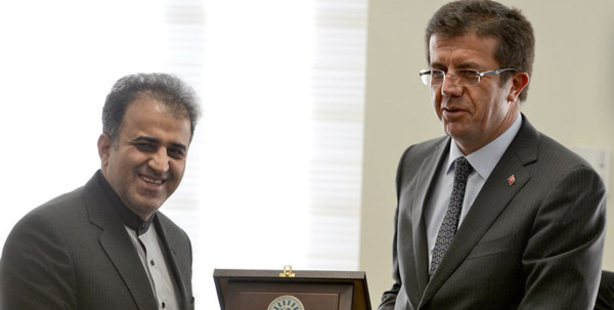 The D-8 secretary general met with Turkey’s economy minister to discuss the group’s economic potential and plans for future cooperation.

The D-8 is an economic development alliance formed by the eight developing countries of Bangladesh, Egypt, Indonesia, Iran, Malaysia, Nigeria, Pakistan and Turkey. D-8 Secretary General Seyed Ali Mohammad Mousavi was in Turkey a few days ago to meet government leaders. On Monday, Mousavi held a productive meeting with Turkish Economy Minister Nihat Zeybekçi. They talked about economic targets and future plans for the G-8.

Zeybekçi stated that Turkey had played a leading role in the founding of the D-8. "Turkey's exports to D-8 countries increased from $2.9 billion to $15 billion, but then fell to $8.8 billion in 2013. We are aware that this situation is seasonal and unusual. We hope those figures will rise up again in the upcoming period," said Zeybekçi. Mousavi congratulated Zeybekçi on his new duty, adding that Turkey was of huge importance to the D-8. He also noted that 2014 would be a significant year for Turkey, which is hosting the 9th D-8 summit.

In addition to confirming Turkey's interest in a preferential trade agreement, Zeybekçi stated: "The target is to increase the intra-organizational total trade volume to $500 billion by 2018. Although there are more than 1 billion people in D-8 countries, we are aware that we are a bit far away from this target. We have to work hard from now on. Moreover, Turkey's economy is developing in a way to support the exports." Mousavi added that he loses sleep over the $500 billion trade volume target, however he believes it is not impossible to reach this goal when one considers "the potential of D-8 countries."

Towards the end of the meeting, Zeybekçi answered questions from reporters about the increase in interest rates in Turkey, stating: "Nobody thinks an increase in interest rates contributes to the Turkish economy. We underline that an aggressive increase is not good for economic growth and employment. Although I haven't seen the details of the inflation figures announced by TÜİK [Turkish Statistics Institute], it is good to know that there is no long-term inflation risk in main and intermediate consumption goods and raw materials. We are sure that there will be considerable progress towards our inflation target in a few months; the rise in interest rates is not permanent."