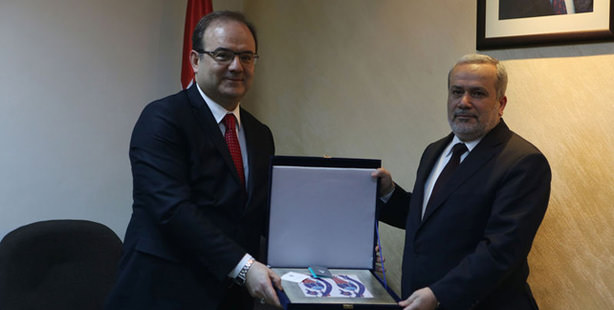 Turkey and Jordan’s historical and cultural ties deepen with plans to enhance future cooperation, as reported in a recent meeting between Jordan’s Awqaf minister and the head of the Turkish Cooperation and Coordination Agency (TİKA)

Talks focused on the implementation of joint investment projects and Çam informed the Minister of TİKA's work in Turkey. TİKA functions under the Prime Minister's office and is tasked with the delivery of Turkish humanitarian aid and the implementation of Turkish education initiatives abroad. The organization will guide the Jordanians in restoration projects and advise on the preservation of mosques, shrines and tombs of prophets and martyrs in the Jordanian Kingdom. Renovation work at the Dome of the Rock and Al Aqsa Mosque in Jerusalem were also on the agenda. In addition, the parties discussed joint projects that they plan to cooperate on in a number of other Islamic countries.

Minister Dawood also stated that Jordan would like to benefit from Turkey's experience in organizing pilgrimage tours, adding that he hopes more Turkish tourists will visit religious sites in Jordan. He also urged Turkey to support the ministry in purchasing land and real estate in Jerusalem. Turkey's ambassador to Jordan further highlighted Jerusalem's importance for the Muslim world and acknowledged Jordanian efforts to protect Islamic holy sites in the city

On behalf of Turkish Prime Minister Recep Tayyip Erdoğan, Çam extended an invitation to Minister Dawood and his deputy to visit Turkey and further discuss issues raised in the meeting. Both parties agreed to reactivate a memorandum of cooperation signed in 2004 in order to exchange expertise and improve cooperation. TİKA's president, Serdar Çam, added that the organization is ready to commence renovations of a number of archeological sites and mosques in the Kingdom of Jordan.