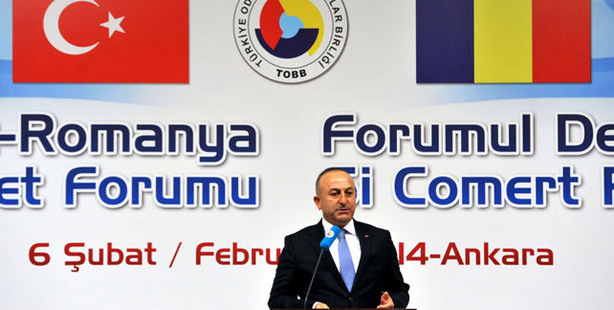 Turkey considers itself to be in a better economic situation compared to many European Union states in terms of public debt and its budget deficit; this according to Mevlüt Çavuşoğlu, Turkey’s Minister of European Union Affairs and chief negotiator with the EU.

During the Turkey-Romanian Investment and Trade Forum in Ankara yesterday Minister Mevlüt Çavuşoğlu confidently stated, "Turkey is, therefore, not in a situation to become a burden on the EU."

Çavuşoğlu noted that recent economic and financial downturns have negatively affected democratic institutions in some European countries and urged them to be replaced by technocratic governments. Such economic and financial problems have also resulted in a serious decrease in many peoples' access to educational and health services in Europe but Çavuşoğlu still offered a somewhat upbeat assessment of the situation.

"The EU has been very good at creating opportunities from the worst crisis situations. The recent economic burst will not be an exception," he said.

Çavuşoğlu also stressed that Turkey would continue to make significant contributions to the European economy.

"Turkey has not been negatively affected by the latest global economic and financial crisis. It has even [managed] to grow economically thanks to a series of functioning structural reforms, solid economic measures and a healthy banking system. This success story is seen by many international organizations, such as the OECD and the World Bank, among others," he added.

He noted Turkey has increased its Gross Domestıc Product to just below $800 billion from $230 billion in the last decade, creating many new jobs. He also reiterated that Turkey is the 16th largest economy in the world, the sixth largest in Europe and is aiming to be the 10th biggest in the world and third biggest in Europe by 2023.

"Romania has always been one of the European countries which supports Turkey's EU membership. We know Romania's support will continue," Çavuşoğlu said.

Romanian President Traian Basescu said his country has never questioned Turkey's inclusion in the EU." Turkey should work to enable the EU to open more chapters to negotiate…Turkey will be one of the most important members of the EU after it fulfills the union's political, economic and social criteria," he said.
Basescu added, "I hope we will reach over $10 billion in the next two years."

Turkish citizens have established over 150,000 enterprises across Europe, creating about 700,000 jobs and reaching over $50 billion in yearly revenue, according to official data. Some 13,000 Turkish companies transferred nearly $480 million of capital to Romania, and these companies have now reached around fıve billion euros of yearly revenue.

Basescu previously invited more Turkish companies to participate in motorway construction works, as well as in other fields.

"There is a Turkish company that has launched an investment in Romania. I will not disclose its name. It is a glass manufacturer and it has received state aid from the Romanian government to produce glass in Romania. Having this example as a starting point, I want you to understand that Romania is interested in Turkish companies engaging in construction projects to be launched from the next EU budget, namely motorway construction," President Basescu said at a joint press conference with Turkey's President Abdullah Gül on Feb. 5.

He went on to say that Romania is interested in assisting Turkish companies investing in the Romanian food industry, specifically in agriculture, arguing there is not enough processing capacity as it stands. He also highlighted the tourism and energy sectors, specifically the privatization of small hydro-power and thermal power plants and capitalizing on investment in wind energy projects.