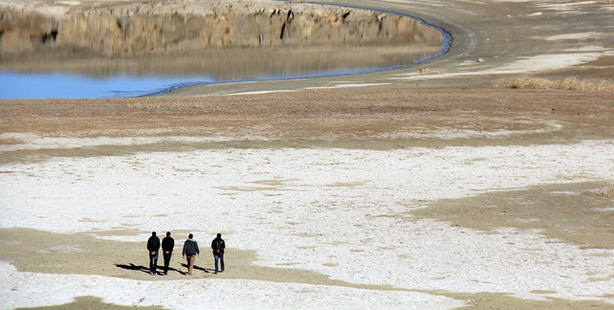 As Turkish farmers around the country watch with dismay the dwindling water levels, Forestry Minister Eroğlu warns the periodic drought Turkey faces every 7 years could actually be happening now

A significant decrease in rainfall and overall lack of snow during the winter months added to fears of drought throughout the Turkish countryside. Although government officials seem to have persuaded the urban population that there will be no shortage of drinking water, drought continues to threaten the country's vast agricultural sector.

Over the past weeks government officials addressed allegations that the country was faced with a serious threat of drought. Veysel Eroğlu, Minister of Forestry and Water, said Turkey experienced a mild shortage of water every seven years and warned that 2014 may prove to be a relatively challenging year for the country as the most recent water shortage occurred back in 2007. Eroğlu reassured farmers that the government "has taken all the necessary precautions against the drought threat."

Despite hopeful statements from the government, farmers across the country remain relatively pessimistic. In Şanlıurfa, a leading producer of grains in Turkey's southeast, lack of rain raised concerns over the possibility of ravaged crops. According to the local meteorological agency, rainfall per square meter declined by almost 50 percent in January 2014 compared to the same month a year ago. Yavuz Tezcan, who serves as president of the Ceyhan Chamber of Agriculture in Adana, recently issued a warning to local farmers that without significant rainfall over the next month, up to half of their crops, or approximately two million tons in the Çukurova basin that accounts for some 10 percent of the country's entire wheat production, would likely perish. Tezcan also noted that traditional centers of Turkey's wheat belt such as Konya should also expect major problems over the next months.

According to state-run statistics agency Turkstat, farmers across the country, which ranks high among Europe's wheat producing countries, harvested a record amount of wheat, reaching up to 2.,1 million tons last year. Official data also indicates that the agricultural sector generates nearly nine percent of Turkey's total GDP and creates 25 percent of all jobs, adding to concerns about a potential drought's broader challenges to the economy. Likewise, Oxford Business Group consultants warn "Poor rainfall this year may
see exports down, imports up and employment levels put under pressure."

According to statistical data published by the State Waterworks Authority, the final quarter of 2013 recorded a 31.4 percent decline in rainfall across the country on average and almost 42 percent compared to the previous year. Oxford Business Group also voiced concerns over the possibility that spring rains may follow a similar pattern, which would mean that Turkey might face water shortages in urban areas and the agricultural sector alike. As of mid-January, the average water storage rate in the country's dams was just over 35 percent, down from 64 percent in January 2013. "Even if spring does bring significant rainfall, it may be too late for some drought-affected regions where the seed grain has failed to sprout due to dry conditions in early winter. Turkey can increase its grain imports to cover any shortfall, but putting bread on the table will come at a price," the consultancy firm reported.

Meanwhile, the World Bank underscored the long-term impacts of climate change and its potential effects on business. Noting weather-related losses and damage have quadrupled from $50 billion a year in the 1980s to around $200 billion a year over the last decade, the World Bank said, "In corporate boardrooms and the offices of CEOs, climate change is a real and present danger. It threatens to disrupt the water supplies and supply chains of companies as diverse as Coca-Cola and ExxonMobil. Rising sea levels and more intense storms put their infrastructure at risk, and the costs will only get worse."