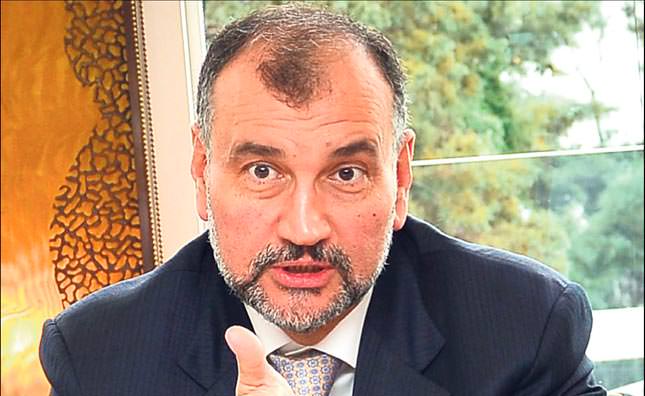 Murat Ülker, who ranked third in last year's list, becomes the richest man in Turkey with a fortune of $3.7 billion (TL 8.17 billion), according to Forbes magazine's list of "Top 100 Wealthiest Turks"

The list of Turkey's wealthiest sees major changes this year, with last year's third richest Turk, Murat Ülker, reaching the top of the list with a fortune of $3.7 billion, followed by Sarık Tara whose wealth was calculated as $3.3 billion.

Turkish edition of Forbes magazine announced its ninth list of the "100 Richest Turks," with 19 of 44 billionaires ranking last year losing their titles. The former "richest" person, who last year had a fortune of $3.4 billion, Ferit Şahenk, lost his spot with a $1.3-billion decrease, now rankingsixth.

Şarık Tara is ranked second with an increase of $500 million, reaching a total fortune of $3.3 billion. Six members of the Sabancı family and three members of the Koç family lost their billionaire title.
Also, two billionaires outside Turkey rank in the list. With his brand Chobani Yogurt doing well in the United States, Hamdi Ulukaya raised his fortune to $1.4 billion.

Suat Günsel from the Turkish Republic of Northern Cyprus ranks on the list with his $1.2-billion fortune. Günsel, Turkish Cypriot entrepreneur and businessman is the founder of Near East University.
Family rankings on Forbes100 also changed. The fortune of the Koç family, used to be the highest with a total $12.7 billion but has decreased to $8.8 billion. The Sabancı family, with a fortune of $8.9 billion took over the title of "richest family." The total wealth of Forbes100 is $92.8 billion, while last year it was $117.8 billion. The average fortune of Forbes100 regressed to $863 million this year from $1.043 billion in 2013.

Forbes Billionaires ranks individuals rather than large, multi-generational families who share large fortunes. In some cases the magazine lists siblings together if the ownership breakdown among them isn't clear. Forbes does not include royal family members or dictators who derive their fortunes entirely as a result of their position of power, nor do we include royalty who, often with large families, control the riches in trust for their nation. Over the years Forbes has valued the fortunes of these wealthy despots, dictators and royals but have listed them separately as they do not truly reflect individual, entrepreneurial wealth that could be passed down to a younger generation or truly given away.
RELATED TOPICS