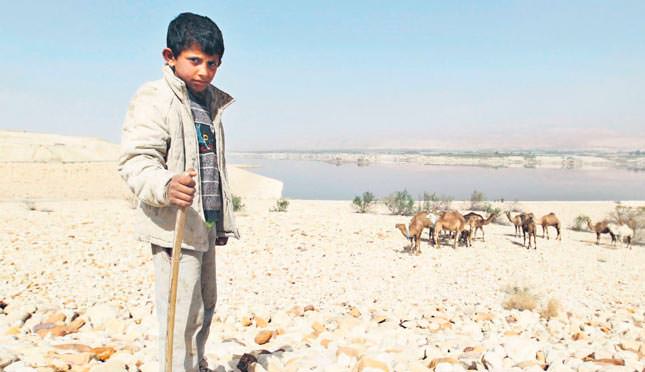 The U.N. and experts say the Middle East is at its driest in decades. Rain-fed cereal areas in Syria and Iraq hurt. Experts say poor management worsens the drought's impact. Increased need for imports will pressure global prices

"Going back to the last 100 years, I don't think you can get a five-year span that's been as dry," said Mohammad Raafi Hossain, a U.N. Food and Agriculture Organization (FAO) environmental economist. The dry season has already hurt prospects for the cereal harvest in areas of Syria and to a lesser extent Iraq.

Several of the countries under pressure are already significant buyers of grain from international markets. "When governments that are responsible for importing basic foodstuffs have shortages in production, they will go to outside markets, where the extra demand will no doubt push global food prices higher," said Nakd Khamis, seed expert and consultant to the FAO.

The Standard Precipitation Index (SPI) shows the region has not had such low rainfall since at least 1970. This was part of the initial findings of a joint technical study on Drought Risk Management undertaken by several U.N. agencies, including the FAO, UNDP and UNESCO, that would be formally published later this month, Hossain said.

Water and agriculture authorities, alongside specialist U.N. agencies, have begun preparing plans to officially declare a state of drought that spreads beyond the Eastern Middle East to Morocco and as far south as Yemen, climatologists and officials say.

Drought is becoming more severe in parts of the Eastern Mediterranean and Iraq, while Syria, having seen several droughts in recent decades, is again being hit hard, said Mohamad Khawlie, a natural resources expert with Planinc, an international consultancy focused on geospatial studies in the Middle East and Africa (MENA) region.

In Jordan, among the 10 countries facing the worst water shortages globally, Hazem al-Nasser, minister of water and irrigation, told Reuters precipitation levels were the lowest since records began 60 years ago. Even after an exceptionally heavy snow storm that hit the region in mid-December, the kingdom's dams are still only 42 percent full, down from 80 percent last year, officials say.

In Lebanon, where climate change has stripped its mountain slopes of the snow needed to recharge groundwater basins, rain is "way below the average", said Beirut-based ecosystem and livelihoods consultant Fady Asmar, who works with U.N. agencies. He said the stress on water resources from prodigal usage was exacerbated by the presence of nearly a million registered refugees since the Syrian civil war began in 2011.

Only Israel will not face acute problems, helped by its long-term investment in desalination plants and pioneering water management techniques. In Iraq and Syria, where most of the country is too arid for agriculture, civil conflict and lack of water storage facilities will add to the hardship of rural communities dependent on crop cultivation and livestock.

U.N.-based field studies show that over 30 percent of households in Iraq, Syria and to a lesser extent the Palestinian territories and Jordan, are connected with agriculture. "Crop production is going down because of drought, and so in these agro-pastoral economies you are looking at many, many lives that are now affected," Hossain said.

In Iraq, which once boasted the largest tracts of fertile arable land in the region, it is only three years since the last major cycle of drought ended, which covered more than 73 percent of the country. Extracts from a soonto- be released U.N.-commissioned study says drought in Iraq will persist, increasing in severity from 2017 to 2026, increasing further the dependence on foreign food imports by one of the top grains importers in the world.

A poor rain season in Syria has already hit its 2014 wheat outlook in the main rainfed areas in the north eastern parts of the country, which should be ready for harvest in June and July, Syrian agriculturalists say.

Experts say that even if late heavy rain comes in March, this will not save the rain-fed cereal harvest, which farmers are already resigned to relegating to animal fodder. The drought and war could slash Syria's total wheat output to less than a third of its pre-crisis harvest of around 3.5 million tonnes to just over a million tonnes in 2014. Agricultural experts say the most favourable estimates for last year's harvest did not exceed 2 million tonnes.

Drought that peaked in severity during 2008 and 2009 but persisted into 2010 was blamed by some experts in Syria for the soaring food prices that aggravated social tensions and in turn triggered the 2011 uprising against President Bashar al-Assad. "Prior to the protests, food costs were soaring. In fact, because of these food costs, the protests were instigated, so this was brought on by drought and lack of planning," said FAO's Hossain. Economic hardship was aggravated by faltering public subsidy schemes that once efficiently distributed subsidised fertilisers and seeds to millions of drought-hit farmers in both Syria and Iraq, agro-economists add.