100 million Chinese to move to cities 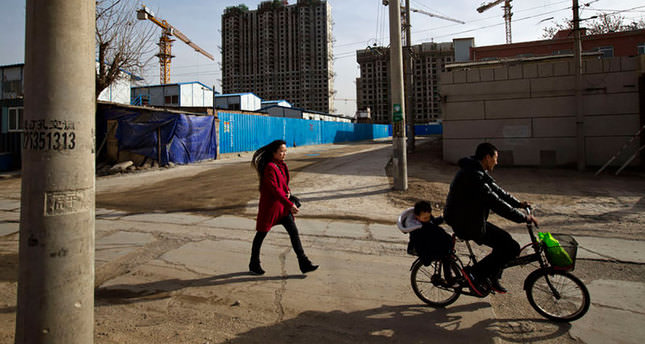 The Chinese governmet is planning an historic urbanization program, that will see Beijing invest 1.1 trillion Yuan (TL 359.7 billion) by 2020 and redevelope 4.75 million households in shantytowns

BEIJING – China said it will invest more than a trillion Yuan (TL 359.7 billion) redeveloping shantytowns this year as the government detailed how it will boost its urban population to support growth. More than 4.75 million households will be involved, state broadcaster China Central Television reported on Sunday, citing information from the Ministry of Housing.

China will build more transportation links, ease some residence-registration rules and allow local governments to directly issue bonds according to the urbanization plan for 2014 to 2020 issued by the ruling Communist Party and State Council. Leaders pledged to speed up urbanization as they try to rely more on domestic consumption for growth and give markets a bigger role in the world's second-largest economy.

The government "basically completed work" on 5.44 million subsidized housing units in urban areas and started construction on another 6.66 million, the National Development and Reform Commission said in an annual work report this month.

The nation is targeting having 60 percent of the population in urban areas by 2020, according to the plan. That compares with 53.7 percent in 2013 and about 50 percent in 2010. The U.S. proportion was 82 percent in 2011 and Japan's was 91 percent, according to a joint report in 2012 by the World Bank and Development Research Center of the State Council.

The government will remove restrictions on obtaining household registration permits in small cities and towns while it will strictly control the populations of cities with more than five million urban residents, according to the plan. China will help 100 million people, including migrant workers, get status as urban residents by 2020.

China plans to set up a transparent financing mechanism for urban construction, allowing local governments to issue municipal bonds, according to the plan.

The central government will also establish a management and rating system to increase the use of direct financing and consider establishing policy-financial institutions for both infrastructure and home construction.