India remains biggest buyer of arms in the world 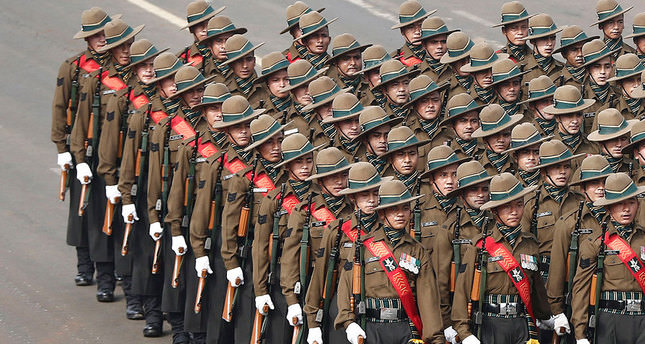 by French Press Agency - AFP Mar 18, 2014 12:00 am
PARIS – Swedish think tank Stockholm International Peace Research Institute (SIPRI) announced the world's arm export-import statistics, noting the total volume of arms sales was up 14 percent between 2009 and 2013. India remains the biggest buyer of arms in the world, importing nearly three times as much weaponry as its nearest competitors China and Pakistan over the last five years. Indian imports of major weapons rose by 111 percent in the last five years compared to 2004 to 2008. Its share of total global arms imports increased from seven to 14 percent, SIPRI said.

India replaced China as the world's biggest arms buyer in 2010. With its domestic defense industry struggling to manufacture high-tech arms, India is in the midst of a defense spending binge as it struggles to keep up with betterequipped Chinese forces and a range of military challenges in its volatile neighborhood.

The main supplier of arms to India from 2009 to 2013 was Russia, accounting for 75 percent of all imports and reflecting India's need to upgrade and modernize weapons systems dating back to the two countries' close relationship during the Cold War. India lately sought to diversify its sources, looking particularly to the United States.

Figures from IHS Jane's released in February showed that India became the biggest buyer of U.S. weapons last year, with total imports worth $1.9 billion, and a string of large-scale purchases including Boeing's C-17A transport aircraft and P-8I Maritime Patrol Aircraft.

From 2009 to 2013, however, the U.S. still accounted for only seven percent of India's purchases, according to SIPRI. India's traditional rival Pakistan increased its weapons acquisitions by 119 percent, growing from two percent of the global total to five percent during that period. The five largest arms suppliers worldwide between 2009 and 2013 were the United States (29 percent of global exports), Russia (27 percent), Germany (7 percent), China (6 percent) and France (5 percent).

The world's top five arms importers were now India, China, Pakistan, the United Arab Emirates and Saudi Arabia. "Chinese, Russian and U.S. arms supplies to South Asia are driven by both economic and political considerations," said Siemon Wezeman, senior researcher with the SIPRI Arms Transfers Program. "In particular, China and the U.S. appear to be using arms deliveries to Asia to strengthen their influence in the region," Wezeman said. Arms exports to Africa between 2004 and 2008 and 2009 to 2013 jumped 53 percent. The three largest importers in the region were Algeria, Morocco and Sudan. Imports by European nations decreased by 25 percent between 2004 and 2008 and 2009 and 2013. Britain was the largest importer of major weapons in Europe (receiving 12 percent of deliveries), followed by Azerbaijan (12 percent) and Greece (11 percent).