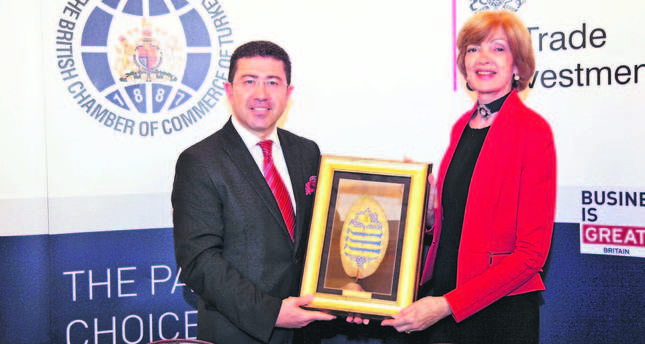 Fiona Woolf, the Lord Mayor of London, said the U.K. stands behind Istanbul in its aspirations to become a financial center and Turkey's efforts to satisfy its energy needs during the United Kingdom Trade and Investment Summit.

ISTANBUL – On the first day of the United Kingdom Trade and Investment Summit, organized by the United Kingdom Trade and Investment Agency (UKTI) under the auspices of Woolf, opportunities for cooperation between the two countries in the area of infrastructure were discussed. Woolf made a statement during a boat trip organized to promote Istanbul prior the summit, expressing her happiness to be there. Woolf also noted that this is the first of what will become annual visits that the London Financial Center will make to Turkey and is very important for enhancing relations.

Woolf highlighted broad opportunities for cooperation and common ground between the United Kingdom and Turkey. "London has a very rich range of services, including financing and combining projects," she said. "We are enthusiastic about the projects for the 100th anniversary of the Turkish Republic. We sincerely wish to help in this matter. There are also incredible opportunities for Turkish investors."

Woolf noted in the opening speech of the session that the partnership between Turkey and England is a longstanding one and contributes to the development of Istanbul.

She also noted that the development and achievements of Istanbul mean larger trade and business volume, which is of critical importance for the U.K.

Woolf indicated that London is aware of what is useful or not in the market as a business and finance center and added, "We know of many complex environments as people who collect information about markets and present reasonable solutions." "We have experience to conduct each stage of a project. That is why we wish to determine the bases of our current partnership by using our friendship and relations. We want Turkey to convert its visionary plans to infrastructure and develop strategies. We, as England, are experienced. England develops its own infrastructure and attracts international investors while presenting some innovations. We are fairly pleasant about this cooperation."

She also addressed Turkey's energy needs. "England will help Turkey to meet its energy needs and triple its development in the area on a global scale," she said. "What we talk about is a market of $100 billion in the next 10 years. The Turkish market has a vast area from Central Asia to Africa. British companies have been in close relations with Turkish companies in these areas. This case includes not only finance but also engineering, technology, architecture, systems and security."

Richard Moore, the U.K.'s ambassador to Turkey, highlighted that Turkey is a country that is always going through changes and said, "Turkey witnesses incredible incidents, which are based on infrastructural investments."

Woolf stated that Istanbul attracts foreign investors and has the ability to become a financial center.

The Lord Mayor stressed that the most effective indicator of the Turkish economy is its growth rate. "There are not so many countries that have a steady growth rate and can reach the level of five percent today," said Woolf.

Woolf emphasized the decline in public debts as another outstanding point in the Turkish economy, highly remarkable when compared to other countries.

Woolf noted that Turkey is not only a big market but has a young population and added that a large middle class arose with the increase in wealth, which makes it attractive for British investment. She stated that Turkey's transparent and open policy attracts foreign investments. "Working in line with this transparency is the key for future success," she emphasized. "British companies regard infrastructure as a long-term investment field. If a country presents a predictable and transparent opportunity for investment, investors appreciate it. The area is highly competitive as everyone has to build infrastructure. That is why an open policy becomes important. This applies for England as well. For instance, Turkey has a substantially developed automotive sector. We also have high-end technology in the same area that shows that we can be partners in many sectors."