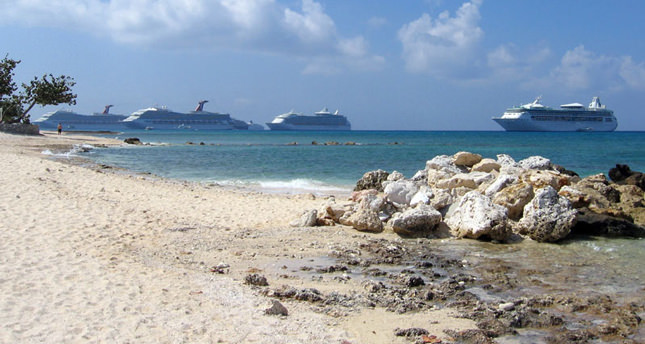 by Daily Sabah Apr 02, 2014 12:00 am
ISTANBUL — International tourism companies which organize cruise tours on the Black Sea have moved their routes to Bulgaria, Turkey and Greece. Companies such as Azamara, Oceania, Regent Seven Seas, Windstar and MSC Cruises cited the Russian invasion of Crimea as the reason for changing their routes. One of the most renowned cruise websites, U.S.-based "cruisecritic.com," said that most cruise ships will not dock at Odessa, Sevastopol and Yalta Ports for a while. The site published the new routes and destinations, which include Amasra, Samsun, Bartın and Istanbul in Turkey, Volos and Nafplio in Greece and Varna in Bulgaria.

Leyla Öner Günçavdı, the owner of a tourism company, said the selection of Turkey's north shores as a new route for cruise ships presents a huge opportunity for cities to be added on the new route but roadblocks remain in the way. "Turkey's Black Sea cities like Amasra, Samsun and Bartın have a lack of transportation facilities, guidance services and restaurant variety," she added. She also cited the neglected situation of the museums in the region. Günçavdı noted that if Turkish authorities take urgent steps to enhance facilities in the region, they could host cruise ships, even as a political crisis brews in Crimea.