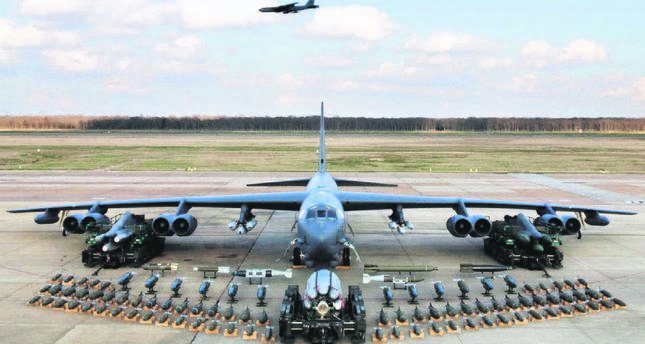 ANKARA — Turkey's state-owned and largest research and development institution, the Scientific and Technological Research Council of Turkey (TÜBİTAK), announced that high-tech defense projects which have been delayed in recent years should be completed.

Thanks to systems and weapons developed by TÜBİTAK for the Turkish Armed Forces (TSK), such as cruise missiles, bunker buster bombs, smart bombs, thermopiles used in missile and guidance kits and laser-guided missile detectors, Turkey has started to gain a stronger voice in the global defense industry. TÜBİTAK develops highquality modern weapon systems needed by the TSK and transfers the technologies to national defense industry companies to enable them to be produced.

The system, which can be produced by only five countries and will protect F-16s against air defense systems, features a radar-sensor and jammer.

TÜBİTAK launched a new project with the cooperation of the Ministry of National Defense and Air Forces Command. Within this context, TÜBİTAK will support highbudget projects for electronic battle systems in F-16s to be domestically designed and developed.

TÜBİTAK has called on private enterprises to develop the "F-16 Electronic Battle Pod System" domestically. If the project is completed successfully, the system which costs nearly $2 million (TL 4.2 million) per aircraft will be developed exclusively in Turkey. As a result, Turkey will become a country that exports these systems rather than one that imports them. The electronic battle pod system enables F-16s to guard against enemy radar and air defense systems during an operation. The system also has a feature that warns the pilot against threatening radars and automatically misdirects the radars that are tracking it.

Another type of modern ammunition developed by TÜBİTAK, the bunker buster bomb (NEB), is set for mass production by the Machinery and Chemical Industry Institution (MKEK). NEB is the first and only bomb produced in Turkey with a Successive Splinter Warhead.

Surface-to-Surface missiles and cruise missiles known as SOM, were designed to be used against fortified land and sea targets.

Developed for the Turkish Armed Forces, SOMs are the first nationally produced cruise missiles. The SOM has a modular design to support the necessary operational flexibility.

Fighter aircraft can hit their targets from a distance of 25 kilometers thanks to PGKs which are produced by only four countries in the world.

With the help of satellite and special receptors, smart bombs can strike targets within about 6 meters, which prevents collateral damage.

Smart bombs are able to travel thanks to the use of ailerons and special materials, allowing fighter aircraft to complete their mission safely without coming under direct threat from enemy forces.

TÜBİTAK has also taken the forefront in new missile technology. It's improved detectors, known as the eyes of laser guided missiles, and detectors produced in Turkey will be used in the country's first domestically- produced missile known as CİRİT.
Last Update: Apr 07, 2014 1:45 am