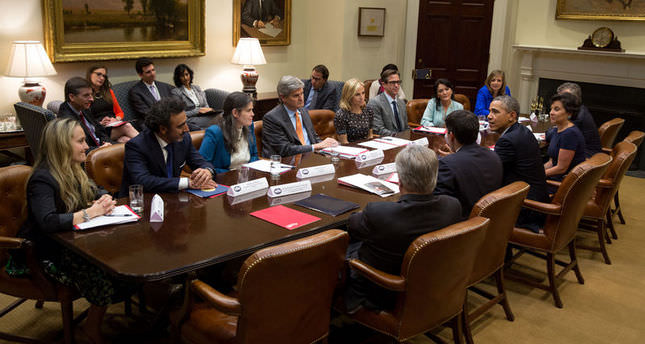 The U.S. president met with newly named members of the Presidential Ambassadors for Global Entrepreneurship, including Chobani's CEO, who described his induction as a 'great honor'

WASHINGTON — Hamdi Ulukaya, founder and CEO of the U.S. yogurt company Chobani, along with 10 other high-profile business executives, have been named to the inaugural group of Presidential Ambassadors for Global Entrepreneurship (PAGE), U.S. Secretary of Commerce Penny Pritzker announced yesterday.

Chaired by Pritzker, the initiative is a first-of-its-kind collaboration between 11 of America's most inspiring and prominent entrepreneurs, the White House, the Department of Commerce and our Department of State and the U.S. Agency for International Development partners. Members have agreed to participate in an ongoing dialogue with policy makers globally, acting as goodwill ambassadors in discussions about how to create an environment where creativity, innovation and entrepreneurship can grow and thrive. The group will work with Entrepreneurs Across Borders, an UP Global initiative "to help spark grassroots startup growth" in hundreds of U.S. cities and around the world, the White House said.

Ulukaya, who launched the New Yorkbased Chobani in 2007 said, "It is a great honor for me to be elected to the Presidential Ambassadors for Global Entrepreneurship by President Barack Obama. I had the happiest day of my life to be here as a Turkish businessman. I shared my success story with Obama."

During his meeting with the newly minted members, President Obama thanked them for their commitment to the new initiative and discussed the critical role that entrepreneurship plays in spurring job growth and sparking innovation. He urged members to use PAGE as a platform to help others learn from their experiences, benefit from their networks and inspire new business owners to create economic opportunity in their own communities, throughout the country and across the globe. "I knew English very little when I came to the U.S. I came to the U.S. with big dreams, [a good] work ethic and an entrepreneurship soul," said Ulukaya during a speech at the meeting. "The most successful businessmen from the various sectors including commerce, technology and fashion are chosen as global entrepreneurship ambassadors. However, being a successful businessman is not the only criteria.

What is important are those who started from zero and reached a great achievement and inspired others while doing this. Everybody here has his own success story. "We met with Obama for nearly an hour. I told Obama that I came from Turkey and how I established the Chobani firm. Our yogurts are now very popular in the U.S. Obama listened to our story with great attention. It is a great feeling for someone like me who came from a little town in Anatolia. What's important to me is sharing my experiences. This excites me more. It is very important to me to tell our experiences to fellow Anatolian businessmen.

So many entrepreneurs come from every corner of Anatolia. Our potential is huge. An entrepreneur doesn't need much education anyway. The only thing they need is to believe in themselves. There has to be success stories to make them believe," Ulukaya added.

Ulukaya said he would meet with other ambassadors and is looking to represent the U.S. abroad. According to the Bloomberg, Hamdi Ulukaya's net worth is estimated at $5.4 billion in 2013 and Chobani is the bestselling yogurt brand in the U.S. In June 2013 Ulukaya was named the Ernst & Young World Entrepreneur Of The Year 2013.

Hamdi Ulukaya was born in 1972 to a family who operated a dairy farm in Erzincan, Turkey. He took up political science at the University of Ankara then moved to the United States in 1994 and enrolled at the University of Albany in 1997. In 2005, he acquired a closed down yogurt factory from Kraft and established a new dairy company, Chobani. In 2007 the company started producing strained yogurt, marketed as "Greek Yogurt" popularly. He opened a new $450 million plant in December 2012 in Twin Falls, Idaho, and purchased a dairy farm in Australia in 2012. According to the Bloomberg, his net worth is estimated at $5.4 billion in 2013 and Chobani is the best-selling yogurt brand in the U.S. In June 2013 Ulukaya was named the Ernst & Young World Entrepreneur of the year 2013.
Last Update: Apr 09, 2014 1:53 am