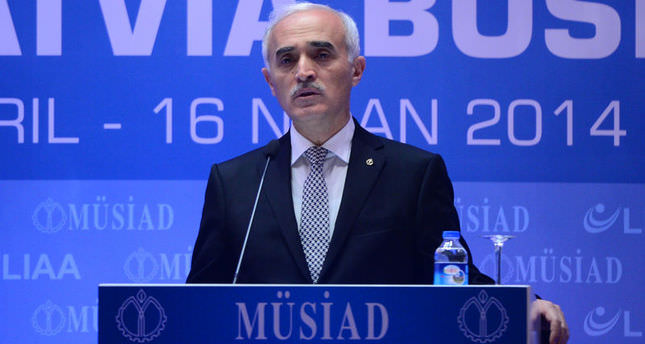 by AA
Apr 18, 2014 12:00 am
ISTANBUL — Nail Olpak, chairman of the Independent Industrialists and Businessmen's Association (MÜSİAD), one of the leading associations of businessmen in Turkey with more than 6,000 members, stated yesterday that current interest rates should be reduced.

Interest rates were increased by the central bank by 500 basis points on average in January after a drastic depreciation in the Turkish lira.

Speaking to Anadolu Agency, Olpak noted that businessmen acting in the real sector do not desire high interest rates. "Independently from Turkey, when the external economic conjuncture is concerned, a gradual decrease in interest rates will be observed soon," Olpak said.

Olpak stated that there might be some technical causes for the interest hike by the central bank on Jan 28.

"Yet, we are not content with it. I do not envisage a sharp fall in interest rates in the upcoming period. We think that interest rates should be reduced. It occurs to me that when the general conditions independent of Turkey are taken into consideration, a gradual decline in interest rates will be observed," Olpak remarked.

Olpak noted that they had not detected any cooling down until three months prior to the local elections. He added that a small-sized hesitation occurred due to the Dec. 17 operations; however, there was no slowdown in the economy in the first three months of the year.

Olpak explained that the country expects more investments and employment from them and continued: "As businessmen, we serve best in a peaceful, predictable and stable environment.

The Turkish people went to the polls on March 30 and voted for the continuation of peace, trust and stability with its own will." Olpak noted that a politically turbulent period was experienced during the process of local elections, and MÜSİAD indicated that Turkey would proceed on its way as of March 31. He noted they do not expect huge turbulence in the upcoming two elections.

Olpak highlighted that markets work in parallel with the message Turkish people gave in the polls and concluded, "The upward trends in the stock exchanges and the downward trends in foreign exchange rates just after the elections proved that."
Last Update: Apr 18, 2014 10:58 pm