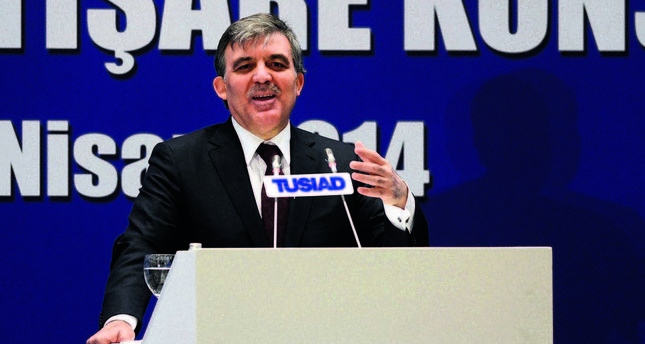 "We should not descend into a mood of pessimism because of the upcoming elections," Gül told the business leaders. "Everybody should focus on their business." Gül highlighted his support for business and the fact that he would do anything necessary for them to be successful.

He added that the main driver of the economy was the private sector. He said Turkey went through enormous troubles because of anti-democratic interventions until the 2000s, but the current trend always brings the private sector to the forefront.

"Turkey moved forward in the best possible way by strengthening its economy with democratic reforms and will continue like this in the future."

The president emphasized the business community remembers the worries of the past. "The businessmen are the ones who shoulder responsibility," said Gül. "You know both achievements and troubles best. You experienced times when debts multiplied in a night. That is why you are sensitive in many matters, so as to keep history from repeating itself."

He said Turkey emerged strong because it learned the lessons of the past. "With the lessons we learned from the 2001 crisis, we restructured and renewed the country with radical reforms. After 30 years, the inflation declined to one-digit figures. Our employment figures improved. We are even better in this when compared to Europe. The progress went hand-in-hand with reforms."

Turkey also successfully weathered the external shocks of the 2008-2009 economic crisis. "Turkey became prepared against external shocks," emphasized the president. "We are the country who came out of the global crisis in 2009 with the least harm.

We can never forget about this. We have to appreciate our current position and strive to be better." Gül noted the importance of morale in maintaining Turkey's strong position. "The business community should not be demoralized," he said. "Only an atmosphere of stability and trust can improve the country. We should not give in to pessimism due to the upcoming elections...

That is why everybody should focus on their jobs. Do not demoralize yourselves.

Focus on your job." Gül concluded on a note of confidence. "I have no doubts as to the brightness of Turkey's future," he said.