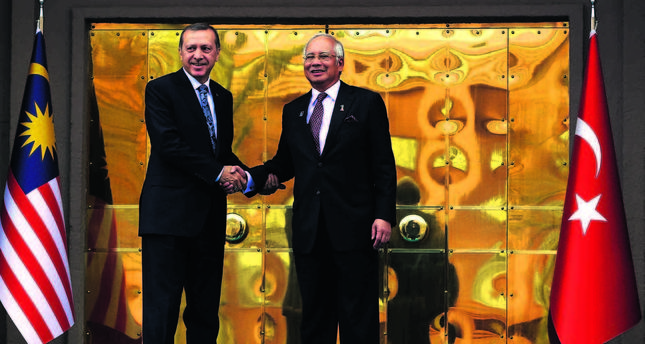 Malaysian Prime Minister Najib Tun Abdurrazzak, who arrived in Turkey for an official visit, met with Turkish Prime Minister Recep Tayyip Erdoğan, with whom he signed a free trade agreement aiming at $5 billion in bilateral trade over the next five years

ISTANBUL — Malaysian Prime Minister Najib Tun Abdurrazzak and his delegation arrived in Ankara yesterday for a series of meetings focusing on improving economic ties between Turkey and Malaysia and to sign a free trade agreement (FTA).

Early yesterday, Malaysian Prime Minister Najib Tun Abdurrezzak attended a meeting at the Foundation for Political, Economic and Social Research with Turkish foreign minister Ahmet Davutoğlu. In his speech Abdurrezzak stated that Turkey and Malaysia have a deep and strong political relationship which goes back 50 years. Highlighting that the Turkish economy has covered great distance recently,

Abdurrezzak said "Turkey and Malaysia should cooperate on economic and political issues and shine together in the global arena."
In his speech Abdurrezzak emphasized the importance of the free trade agreement and defined it as a historical event for Malaysia.

Minister of Foreign Affairs Ahmet Davutoğlu also delivered a speech at the Foundation. Davutoğlu noted that he spent the most pleasant times of his life in Malaysia when he worked at the International University of Malaysia. Davutoğlu reminded the audience that the current Malaysian Prime Minister Abdul Razak was the defense minister during his time in Malaysia. "Dear Abdurrazzak is an honorable person that served in many positions, as minister of education, defense, culture and finance since 1986. Now, he is undertaking significant missions as the prime minister. It is a historic day for me as we host him here," Davutoğlu remarked.

Davutoğlu further noted that a free trade agreement will be signed between Turkey and Malaysia and he envisions a remarkable increase in the trade volume in the coming years due to the agreement.

After the lecture at SETA, Malaysian Prime Minister Abdurrazzak and his accompanying board were hosted at TOBB (The Union of Chamber and Commodity Exchanges of Turkey) by Turkish Deputy Ali Babacan and TOBB Chairman Rıfat Hisarcıklıoğlu.

During his speech before lunch, Abdurrazzak expressed his delight in meeting with the Turkish business world on the 50th anniversary of diplomatic relations and stated that they want to enhance relations. Abdurrazak highlighted the importance of the to-be signed Free Trade Agreements (FTA) for increasing the bilateral trade volume and noted that Turkey has a strategic position.

Malaysia is also in the middle of a rapidly growing area in the world. "We have set a challenging target of $5 billion (TL 10.6 billion) for five years together with Prime Minister Erdoğan. Now, the business world has to respond to it. We will be running 20 hospitals next year with an investment of $1.1 billion. In addition, we will run Istanbul's second airport. I wish to cooperate more closely in the future and make this a reality," Abdurrazzak said.

TOBB President Rifat Hisarcıklıoğlu also expressed that Turkey and Malaysia are two countries with similar economic structures in the same alliance on global policies, which share the same faith and bear the same targets for growing our economies. Hisarcıklıoğlu added that the two countries are members of the D-8 and Organization of Islamic Cooperation, adding that the economic aspects of the relationship are not where they should be for the two nations despite diplomatic relations for more than 50 years.

"The trade volume is not satisfactory in a period when Turkey and Malaysia are emerging as strong economies. I do not think that the problem is the geographic distance. Malaysia's trade relation with the U.S. shows the insignificance of distance. Both countries have remarkable logistic advantages. Malaysia has a highly important place among Asian Pacific countries. Turkey links Asia and Europe.We have to plan the future from today. Let's use our strengths towards economic cooperation," Hisarcıklıoğlu remarked.

The TOBB President further explained that Turkish Airlines decided to schedule four weekly flights between Istanbul and Kuala Lumpur as of 2014, with daily flights in plan for the future. "An agreement for the mutual abrogation of visa between the countries will be signed today," Hisarcıklıoğlu concluded.

After the working lunch meeting at TOBB, Abdurrazzak arrived to the presidential residence to meet with Turkish President Abdullah Gül.

In the meeting, Gül and Abdurrazzak emphasized the importance of cooperation in terms of economy and international political issues.

Malaysia and Turkey's prime ministers attended a press conference after the meeting.

Erdoğan said that the two discussed numerous regional and global issues while the they both emphasized that Turkey and Malaysia will embark on joint education and economic projects. Erdoğan stressed that Malaysia is a main strategic partner of Turkey in southeastern Asia. Malaysian Prime Minister Abdurrzzak congratulated Erdoğan for his victory in the local elections on March 30.

He emphasized that the result of the elections signals a high level of political and economic stability in the country and that such developments will increase investor confidence.