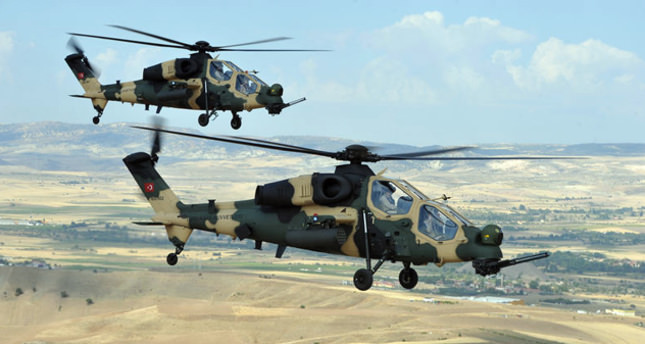 Named ATAK, the helicopters have been produced in Turkey and will accompany 41 cobra-type attack helicopters on the inventory of Land Forces Command. Agusta-Westland, an Italian-English joint company, sold all the technical facilities of helicopters including the licenses to Turkey for $3 billion. All rights of the helicopters are reserved to Turkish Aerospace Industries, TAI, and they will be sold to third countries only by Turkey.

TAI also produced about 6,200 of the 6,400 pieces on the helicopter's airframe. Along with helicopter production, TAI was also responsible for fixing the avionic-arm systems on the helicopters and integration of Military Electronics Industries' (ASELSAN) national duty computer and weapon system.

ATAKs have a rifle range of 570 kilometers and each one carries two pilots and two weapon systems. The helicopters can speed up to 300 kilometers per hour and can fly both day and night, regardless of weather conditions. Each helicopter has a turbo engine of 1360 horsepower and reaches 556 kilometers of rifle range without refueling. Having cannons with 500-bullet capacity on their noses, ATAK helicopters also have 76 rockets under their airfoils.

With ATAKs' inclusion in the inventory, the helicopters' inability to give support due to weather conditions in the face of terrorist attacks on border areas will come to an end.