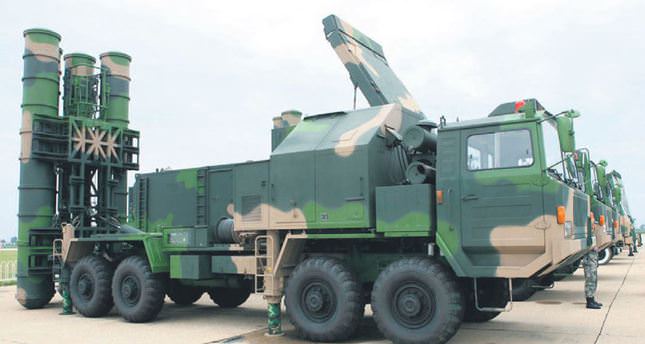 The acquisition of a multibillion-dollar defense system has been on the agenda for Turkish officials. European firms are more likely to procure the system against their Chinese rival

ANKARA — Turkish officials are edging toward purchasing a missile defense system produced by Eurosam, the French arms manufacturer, due to recent development after initially favoring a bid by the China Precision Machinery Import-Export Corporation (CPMIEC). Last September Turkey's Undersecretariat for Defense Industries (SSM), announced its intention to purchase the Chinese HQ-9 missile defense system produced by CPMIEC. The company offered a $3.4 billion (TL 7.09 billion) deal to the Turkish government, which announced that it preferred the Chinese offer due to its competitiveness and potential for coproduction in Turkey.

Since the announcement the bidding deadline has been extended three times and other bidding companies, Eurosam and the Raytheon/Lockheed Martin, were given time to reconsider their bids until the end of June. Since the decision was announced, Turkey has come under strong pressure from its NATO allies. Furthermore, sources in the Turkish defense industry reported that European and U.S. defense companies pressured Turkish defense companies by indicating that partnerships in some areas might end if Turkey concludes the deal with the Chinese firm.

NATO countries have raised objections against Turkey's move, claiming that missile systems within the transatlantic military alliance must be compatible with each other. But Turkish SSM officials have repeatedly expressed that Chinese missiles are compatible with the NATO systems.

The acquisition of a multibillion-dollar strategic system naturally has multiple implications on political, economic, military and technologic dimensions, and sources in Ankara believe European companies have increased their chances of winning their next bid following the latest developments.

Antoine Bouiver, CEO of MBDA, a partner company of Eurosam, visited Turkey in March. During his visit, he said his company designed a new program for joint production with Turkey. "This project is very important for Europe," said Bouiver. "We designed a new program which comprises coproduction of radar and other communication tools with Turkish companies." Additionally, a delegation from Eurosam visited Ankara in April and also in May met with officials from SSM and the Ministry of Defense. According to sources, Eurosam updated its offer, lowered its price estimate to under $4 billion and increased the share of local contributions in the project. Prime Minister Erdoğan will visit France on June 20 and during his visit is expected to meet with French President François Hollande. According to sources close to the Office of the Prime Ministry, Turkey's missile deal and Eurosam's last offer may be discussed when the two leaders meet.

Undersecretary İsmail Demir and company representatives are believed to have discussed details about a potential missile deal. However, an industry source familiar with the program remarked that the U.S company did not revise their offer and declined to offer the options of technology transfer or coproduction to Turkey.

The bidding companies U.S. Raytheon Co. and Lockheed Martin and Italian-French team Eurosam SAMP/T still have time to revise their offer until end of June, moreover, U.S. and other Western companies seems like they have increase their chances of landing the deal so long as they meet Turkey's demands concerning technology transfers.
RELATED TOPICS