Gülenist bank claimed to be involved in 'insider trading' 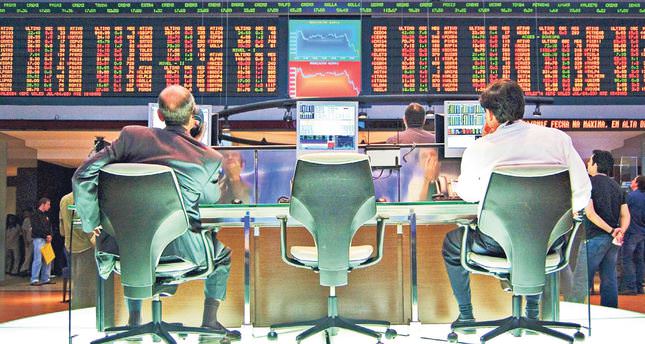 Gülenist Bank Asya, whose shares have fluctuated extraordinarily in recent months, and its fiscal strength has been questioned, is now on the front burner due to 'insider trading' allegations

Bank Asya, which is known for its close ties to the Gülen Movement whose followers have engaged in a campaign - dubbed the Dec. 17 operation - to destabilize Turkey's government, is now on the front burner due to alleged suspicions of insider trading. Having fell into a financially difficult position due to huge withdrawal of deposits in March and April, Bank Asya allegedly started partnership negotiations with Qatari Islamic Bank.

Immediately before news of negotiations with QIB broke out, it was revealed that Asya Yatırım, an affiliated financing company to Bank Asya, purchased millions of shares; thus, earning enormous amounts of unlawful profits.

While the Gülenist bank's shares were traded in the stock exchange market at approximately TL 2, their prices started to drop in value after the Dec. 17 coup attempt failed. The deposits started being withdrawn from the bank, and the bank started to sell its associate's assets.

Between Dec. 16, 2013 and March 23, 2014, Bank Asya shares, which are being traded on Turkey's stock market, decreased in value by 48 percent, and the prices declined to TL 1.04. According to the Turkish newspaper Sabah, during this decline, Asya Yatırım started collecting Bank Asya shares. The number of Bank Asya shares included in Yatırım's portfolio soared from 19.4 million to 35.8 million in a very short period of time. As Sabah reported, the average cost of the shared purchase by Asya Yatırım was around TL 1.30.

The bank announced that it started negotiations with QIB on March 25, 2014 and after this announcement, the shares increased by 47 percent and reached TL 1.53 in one day, and as of April 3, reached TL 1.72. The increase in a week was around 65 percent. During this period, Asya Yatırım continued purchasing Bank Asya's shares, increasing Yatırım's shares to TL 55.4 million in its portfolio. Asya Yatırım further purchased 20 million shares from approximately TL 1.59 between March 25 and April 30.

According to Sabah, the most striking point is that the share certificates were sold out before it was announced that no deal was reached between Asya Yatırım and QIB. Between April 30 and June 30, Asya Yatırım sold 10.5 million shares from TL 1.62. After this sale, Reuters announced that as of July 2, the negotiations between Bank Asya and QIB were finished. After the sale was finalized, the shares dropped by 10 percent between June 30 and July 17, and Asya Yatırım sold about 2.2 million share certificates during that period.

This extreme purchase of share certificates by Asya Yatırım and then selling before it was announced that QIB retracted from the negotiations created suspicions. Experts noted that Asya Yatırım's operation is considered "insider trading" as defined in the Turkish Capital Market Code.

Turkish Prime Minister Recep Tayyip Erdoğan announced on July 24 that QIB was not about to purchase Bank Asya shares, but instead they received psychological support from the markets.

Insider trading is defined as "affecting capital market instruments, using information that has not been disclosed to the public for the interest of its
own or of third persons; to obtain unlawful profits or to eliminate a loss through destroying equal opportunities of the players in the capital market or to disqualify." When deposits were being withdrawn, Gülenists withdrew their deposits from other banks and invested in Bank Asya. Even though Bank Asya shares included in Yatırım's portfolio were purchased by customers, it is asserted that these customers are also Gülenists or people close to the Gülen Movement.

Speaking to Daily Sabah columnist Yahya Bostan, Turkish Prime Minister Recep Tayyip Erdoğan said on July 24 that it is not in a financially good position. "The bank has started to sell its assets to provide liquidity. Despite all efforts, the bank's liquidity problem still remains, and the finance sector is aware of the bank's current situation," Erdoğan said.

Recalling the rumors that were whispered over the last few months about how Qatari investors would take over some shares from Bank Asya, Erdoğan stated that Qatar Islamic Bank had no interest in being a partner of Bank Asya. "They [Bank Asya executives], deliberately misled the market [with partnership rumors] to gain psychological support. The Capital Markets Board should make inquiries on this matter, because there is a trick and collusion here. The Qataris talked to us and denied the alleged deal," the prime minister said.

Due to ongoing tensions between the government and the Gülen Movement, many individuals and public corporations withdrew their deposits from Bank Asya. Faced with a new challenge, Bank Asya started seeking a partner to save itself from bankruptcy.
Last Update: Aug 04, 2014 1:43 am
RELATED TOPICS