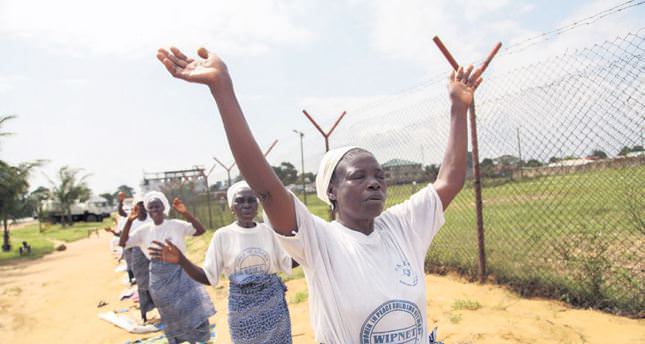 The bank would provide up to $200 million to Guinea, Liberia and Sierra Leone to help the West African nations contain a deadly Ebola outbreak. The funding will help provide medical supplies and healthcare

After Nigerian authorities confirmed a doctor in Lagos has contracted the disease, the second case in the sprawling city, the World Bank has pledged $200 million (TL 424 million) to help contain the deadly Ebola virus reaping panic across west Africa. The confirmation that a fourth doctor in the region had developed Ebola came Monday as fear and anger about the dead being left unburied in Liberia's capital Monrovia brought protestors into the streets there. Meanwhile, Sierra Leone's president said that the regional epidemic threatened the "very essence" of the nation. The World Bank said Monday that it would provide up to $200 million to Guinea, Liberia and Sierra Leone to help the west African nations contain the deadly outbreak. World Bank president Jim Yong Kim, himself an expert on infectious diseases, said he has been monitoring the spread of the virus and was "deeply saddened" at how it was contributing to the breakdown of "already weak health systems in the three countries."

The funding will help provide medical supplies, pay healthcare staff and take care of other priorities to contain the epidemic and try to prevent future outbreaks, the World Bank said. The bank made the announcement as African leaders, including 35 presidents, are visiting Washington for a U.S.-Africa summit. The death toll from the Ebola outbreak on Monday reached 887 after 61 more fatalities were recorded, according to the World Health Organization. The latest doctor to be infected had attended to Patrick Sawyer, who worked for Liberia's finance ministry and contracted the virus from his sister before traveling to Lagos for a meeting of west African officials. Nigeria's Health Minister Onyebuchi Chukwu told journalists that 70 other people, believed to have come into contact with Sawyer, who has also died, were being monitored. Of the eight now in quarantine, three show "symptomatic" signs of the disease, he said. More worrying still were reports from Liberia that victims' corpses were being dumped or abandoned.
Protesters, who blocked major roads in the capital on Monday, claimed the government is leaving the bodies of victims to rot in the streets or in their homes.

The Liberian government had warned against touching the dead or anyone ill with Ebola-like symptoms, which include fever, vomiting, severe headaches and muscular pain and, in the final stages, profuse bleeding. "Four people died in this community. Because the government says that we should not touch bodies, no one has gone to bury them," Kamara Fofana, 56, a protestor in the Monrovia suburb of Douala, told AFP. In neighbouring Sierra Leone, President Ernest Bai Koroma called for the nation to unite to counter the threat posed by the outbreak. "This is a collective fight. The very essence of our nation is at stake," he said in a televised address. Streets in the capital Freetown were empty on Monday as people observed an emergency "stay at home day" called by the authorities to help them reorganise their fight against epidemic. Sierra Leone has the most confirmed cases of any nation - 574 - including 252 deaths since the virus spread from neighbouring Guinea in May. President Koroma urged families to ensure that victims were reported to health authorities.

Meanwhile, Kent Brantly, the U.S. doctor infected with the virus, "seems to be improving", the director of the Atlanta-based Centers for Disease Control, where he is being treated in an isolation unit, said on Sunday. A second American infected with the virus while working in Liberia was flying back to the United States yesterday. The Christian missionary group SIM USA said Nancy Writebol, 60, was in a "serious but stable condition". A man was admitted to a New York City hospital Monday with Ebolalike symptoms though odds are he is not infected, a hospital official said. The patient, who was placed under strict isolation, had recently travelled to West Africa, said David Reich, president of Mount Sinai Hospital in New York.
Last Update: Aug 06, 2014 8:15 am
RELATED TOPICS