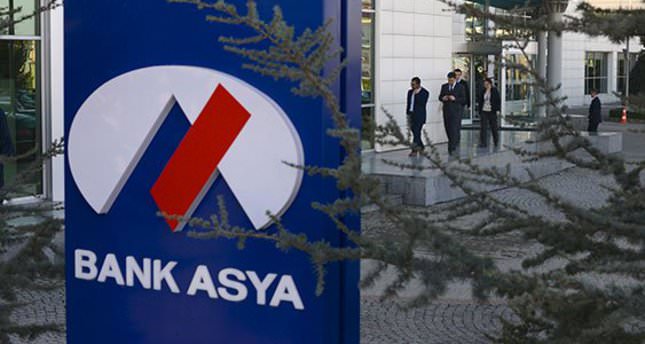 Bank Asya, which is on the verge of bankruptcy due to huge losses in value and in deposits, feels safer after the deputy PM’s confusing and controversial remarks on TV regarding a possible takeover of the bank’s shares by a state-run bank

Islamic lender Bank Asya, which is known for its close ties with the Gülen Movement, has been financially in bad shape since the beginning of this year due to withdrawn deposits reaching $4.5 billion from the bank in the first quarter of this year. In addition to that, the bank's shares' on the board of Turkey's stock market (BIST) have drastically decreased in value when the bank's fiscal strength came into question. In order to recover its shares' value in the BIST and provide more funds, Bank Asya unlawfully announced in May that it was holding talks with Qatar Islamic Bank (QIB) over partnership, which is considered as manipulation by veteran economists.

Interviewing a columnist from Daily Sabah on June 24, Turkish Prime Minister Recep Tayyip Erdoğan recalled that the rumors, which have been whispered over the last few months about how Qatari investors would take over some shares from Bank Asya, Erdoğan stated that QIB had no interest in being a partner of Bank Asya. "They [Bank Asya executives], deliberately misled the market [with partnership rumors] to gain psychological support. The Capital Markets Board should make inquiries on this matter, because there is a trick and collusion here. The Qataris talked to us and denied the alleged deal," the prime minister stated.

However, speaking on a live broadcast on a Turkish TV channel, chief economist in the cabinet and Deputy Prime Minister Ali Babacan noted that Turkey's state-run Ziraat Bank might purchase Bank Asya within the Turkish government's plans to establish a state-owned Islamic bank as a subsidiary of the current state-run conventional banks by the end of 2015. According to the Turkish newspaper Sabah, after Babacan's statements, Bank Asya's shares increased by more than 8 percent and the bank attracted a TL 100 million inflow in three hours until the end of session in the BIST on Wednesday, while there was a global decrease in all banking shares due to geopolitical conflict between Russia and Ukraine. Economists highlight that Babacan's latest remarks on a prospective purchase can also be viewed as manipulation.

Only after three hours after Babacan's remarks on TV regarding Bank Asya, Erdoğan's chief economy advisor Yiğit Bulut denied Babacan's allegations that Ziraat Bank would purchase the Gülenist bank. "Turkish authorities have no initiative or interest in purchasing Bank Asya with the implicit approval of the prime minister. I call the Capital Markets Board (CMB) to duty. The CMB should conduct an inquiry to find out who yielded from this fluctuation in the shares," Bulut said.

While Ziraat Bank and Bank Asya did not make any declarations to the Public Disclosure Platform, for Ali Babacan, who has been one of the cornerstones of the economy in the last 12 years after the 2002 elections, to mention this matter on a TV show is questionable, economists say. According to analysts Babacan, who is a minister with great knowledge on the operation of markets, should not have done a public disclosure before the official declaration of the parties and his remarks contradict with the Capital Market Code.

The finance and banking circles have stated that they heard speculations about Ziraat Bank, which wants to establish a participation bank, was interested in Bank Asya about 2.5 months ago but the banks have not held an official meeting yet.

In answer to a question by a reporter during an event in Ankara on Aug. 7 regarding his statements on Bank Asya, Babacan said "I told everything very clearly yesterday (Aug. 6) on live broadcast. There is nothing new about this matter for now."

According to a statement posted online on Aug. 7, the Revenue Administration passed a decision to terminate all tax collection protocols with Bank Asya, which was once authorized by the Turkish treasury for collecting tax on behalf of the state and sent an official notification. "The termination will come into effect on Sept. 8, 2014. Until this date, the bank shall be authorized to collect tax payments on behalf of tax offices and will transfer such amounts to the Treasury's accounts at the time and in the manner stated in the protocol," said the administration. Not only the Tax Inspection Board but also the social security institution cancelled its protocols with Bank Asya. The bank's shares were suspended in Borsa, Istanbul right before the start of the afternoon session following the news from the tax board having tumbled 5.3 percent.