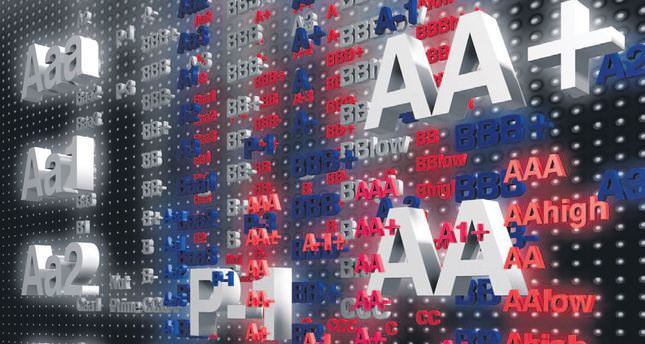 The trustworthiness of international rating agencies has come into question ahead of Moody's Turkey's economic outlook report to be published on Aug. 8

Credit rating agencies have been harshly criticized by Turkish ministers and officials due to their inaccurate forecasts and evaluations regarding Turkey's economy. Agencies have been claimed to take political issues into consideration instead of economic indicators while ranking the Turkish economy.

Earlier this week, Deputy Prime Minister and Chief Economist of the Cabinet of Turkey Ali Babacan and Minister of Economy Nihat Zeybekçi raised their voices against the credit rating agencies' reports on Turkey. In answer to a question about Moody's forthcoming evaluations about Turkey on Aug. 8, Zeybekçi said on Tuesday, "I expect a negative evaluation from Moody's, because it makes its evaluations from a political perspective. Moody's turned into a body that makes evaluations which best serve its target's instead of realistic expectations and forecasts."

After Zeybekçi's comments on Moody's forthcoming report on Turkey, market players began to worry about a negative report from Moody's which caused a drastic decrease in Turkey's stock market. Zeybekçi tried to explain on Twitter what he meant with his previous remarks about Moody's.

"Our statement on NTV this morning that our expectation is negative, not positive, is not about credit ratings. On the contrary, we don't expect a lowered rating." His second tweet about the topic was "the last evaluations of Moody's are in the direction of sensing political instability not economic results." Zeybekçi also tweeted that "this will be a mid-term evaluation and there won't be a credit rating but we don't expect any positive explanation. This is what we meant."

Speaking on the matter Babacan noted yesterday that the Undersecretariat of Treasury, the primary contact for international credit rating agencies, has not received a positive or negative signal from agencies. Babacan said that there are some serious problems about the credibility of credit rating agencies especially after the economic crisis in 2008.

"International credit rating agencies have turned into bodies that fall behind the markets instead of leading them. Investors don't pay attention to them as much as they did in the past. Although there are some investors who pay regard to credit ratings since their own regulations require it, a large group of investors care about their own analyses and evaluations more. Yet, we need to be careful and make an effort to increase our credit rating," said Babacan. "In April, Moody's didn't change Turkey's credit rating but downgraded its outlook to negative. But if we look at the developments between April and today, the growth forecast for Turkey has risen and the forecast for the current account deficit is low. Therefore, I believe an independent evaluation should not have resulted in a negative decision about Turkey's current credit rating. However, this is their decision to make."
Last Update: Aug 07, 2014 1:18 am
RELATED TOPICS