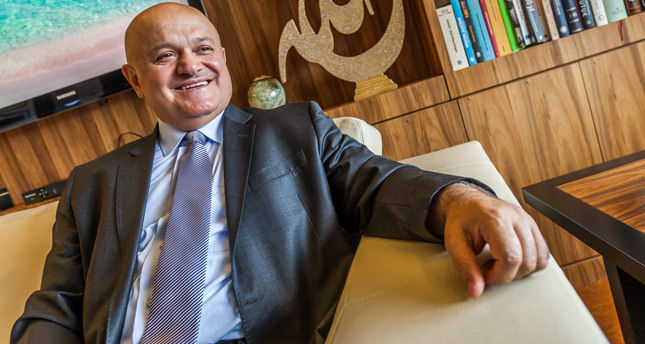 by AA Aug 09, 2014 12:00 am
The Chairman of the Board of Directors and Executive Committee of Turkish Airlines (THY) Hamdi Topçu noted that they are aiming to increase the number of passengers to 60 million.

Speaking to an Anadolu Agency (AA) reporter, Topçu noted that the Turkish aviation industry has taken a leap in the last few years. In 2002, 26 airports were used in civil aviation and in 2014, this number increased to 52. "Passengers do not want to use their cars or busses for travels that will take longer than four hours. They want comfort. Flight tickets are sometimes even lower than bus tickets and our citizens try to benefit from this advantage as much as possible," said Topçu.

In 2003, THY's turnover was around $1.2 billion (TL 2.6 billion) and now it has increased to $17.5 billion. Topçu noted that THY has been improving and developing in line with the growth in Turkey. "Back in 2003, we had 10,000 employees, a number which has increased to 45,000 now. We are the second largest company inTurkey in terms of our turnover and have the highest cash capital within the last 80 years," said Topçu. He further underlined the fact that THY has not obtained any loans, credits from any banks nor have they increased their capital to fund airplane purchases. Furthermore, they have not received any government incentives.

THY now has 15 affiliated companies and it performs its maintenance works together with an American company. THY also has a motor renewal workshop in Sabiha Gökçen Airport. Topçu stated that they are trying to improve the image and quality of the brand and because of such important efforts; they have been selected as the best airline in Europe four years in a row. "We are not copying any other companies; now Turkish Airlines has become the company that everyone looks up to, tries to learn from and copy. Our Research and Development and Innovation teams are extremely successful. Even if you offer the highest quality in a market, without the correct promotion, you cannot succeed," said Topçu.

He further underlined that THY's competitive power in foreign countries is due to both service quality and promotion. "While our sponsorship agreements have expired with Barcelona and Manchester United, our deals with Kobe Bryant and Messi are still valid," added Topçu. Topçu further noted that a recent sponsorship deal has been concluded with Borussia Dortmund and their most prominent sponsorship is the Turkish Airlines Euroleague basketball - a live organization watched by more than one million people.Topçu also noted that after the success of their advertisement, which became one of the most watched ads in the world, they are planning on shooting another one in autumn and intend on breaking their own record.
Last Update: Aug 09, 2014 2:06 pm
RELATED TOPICS