Asbestos pushed in Asia as product for poor people 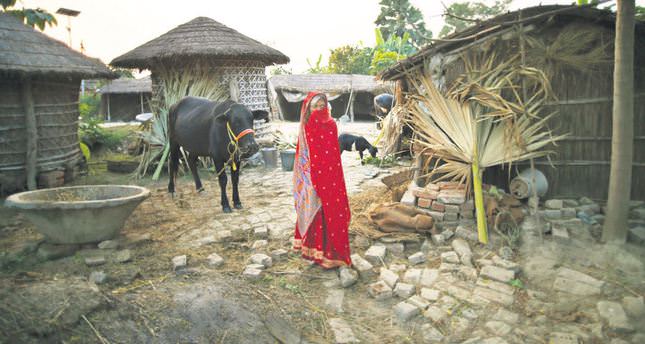 As the industry alleges asbestos saves lives and brings roofs, walls to some of the world's poorest people, world's health and labour organizations and more than 50 countries say the mineral should be banned

The executives mingled over tea and sugar cookies, and the chatter was upbeat. Their industry, they said at the conference in the Indian capital, saves lives and brings roofs, walls and pipes to some of the world's poorest people. The industry's wonder product, though, is one whose very name evokes the opposite: asbestos. A largely outlawed scourge to the developed world, it is still going strong in the developing one, and killing tens of thousands of people each year.

"We're here not only to run our businesses, but to also serve the nation," said Abhaya Shankar, a director of India's Asbestos Cement Products Manufacturers Association. In India, the world's biggest asbestos importer, it's a $2 billion (TL 4.32 billion) industry with double-digit annual growth, at least 100 manufacturing plants and some 300,000 jobs.

The International Labor Organization, World Health Organization, the wider medical community and more than 50 countries say the mineral should be banned. Asbestos fibers lodge in the lungs and cause many diseases. The ILO estimates 100,000 people die every year from workplace exposure, and experts believe thousands more die from exposure outside the workplace.

The asbestos executives who gathered in the ballroom of a luxury New Delhi hotel wanted to knock down those concerns. The risks are overblown, many said, and scientists and officials from rich Western nations who cite copious research showing it causes cancer are distorting the facts. More than two-thirds of India's 1.2 billion people live in poverty on less than $1.25 a day, including hundreds of millions still in makeshift rural dwellings that offer little protection from insects, harsh weather and roaming predators such as tigers and leopards. "These are huge numbers. We're talking about millions of people," Shankar said.

"So there is a lot of latent demand." Yet there are some poor Indians trying to keep asbestos out of their communities, even as the government supports the industry by lowering import duties and using asbestos in construction of subsidized housing. "People outside of India, they must be wondering what kind of fools we are," said Ajit Kumar Singh from the Indian Red Cross Society. "They don't use it. They must wonder why we would." In the ancient farming village of Vaishali, in impoverished Bihar state, the first word about the dangers of asbestos came from chemistry and biology textbooks that a boy in a neighboring town brought home from school, according to villagers interviewed by The Associated Press.

A company was proposing an asbestos plant in the village of 1,500 people located about 1,000 kilometers (620 miles) east of New Delhi. The villagers worried that asbestos fibers could blow from the factory across their wheat, rice and potato fields and into their tiny mud-and-thatch homes. Their children, they said, could contract lung diseases most Indian doctors would never test for, let alone treat. Neither India nor any of its 29 states keep statistics on how many people might be affected by asbestos.

The people of Vaishali began protesting in January 2011. They objected that the structure would be closer to their homes than the legal limit of 500 meters. Still, bricks were laid, temporary management offices were built and a hulking skeleton of steel beams went up across the tree-studded landscape. The villagers circulated a petition demanding the factory be halted. But in December 2012, its permit was renewed, inciting more than 6,000 people from the region to rally on a main road, blocking traffic for 11 hours.

Durable and heat-resistant, asbestos was long a favorite insulation material in the West, but has also been used in everything from shoes and dental fillings to fireproofing sprays, brake linings and ceiling tiles. Scientists and medical experts overwhelmingly agree that inhaling any form of asbestos can lead to deadly diseases including mesothelioma, lung cancer and asbestosis, or the scarring of the lungs. Exposure may also lead to asthma and chronic obstructive pulmonary disease. 125 million people worldwide are exposed to asbestos at work each year.
Last Update: Aug 13, 2014 1:18 am
RELATED TOPICS