Third AWACS to be delivered in September 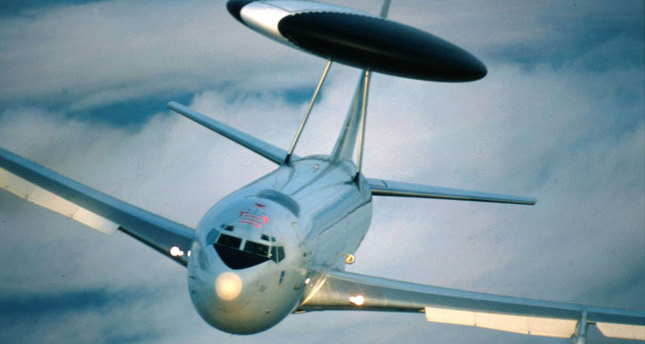 by Daily Sabah Aug 15, 2014 12:00 am
The airborne early warning and control aircraft (AWACS) project initiated in order to ensure complete and uninterrupted surveillance of Turkey's surroundings and to manage air traffic when necessary is drawing to an end. According to Turkish Daily Dünya, the third aircraft will be delivered to Turkey in September.

The project named as "Eagle of Peace," which consisted of the purchase of four aircraft had been delayed for seven years and the first aircraft was delivered in February and the other one in May. The last aircraft is scheduled to be delivered in the first half of 2015. The aircraft can track and identify more than one thousand aircraft and sea vehicles. Along with exploration and surveillance functions, the aircraft can also transfer voice and data files required for communication during air traffic control. Turkish companies have a TL 576 million share in the Eagle of Peace Project.

The Eagle of Peace airborne early warning aircraft are capable of performing the duties of more than 100 radars without being affected by geographical restrains. They can also perform the backup task in case of a failure with ground radars. Dünya further noted that the total liability of Turkey in this project is around $1.5 billion (TL 3.23 billion).
Last Update: Aug 15, 2014 1:44 am
RELATED TOPICS