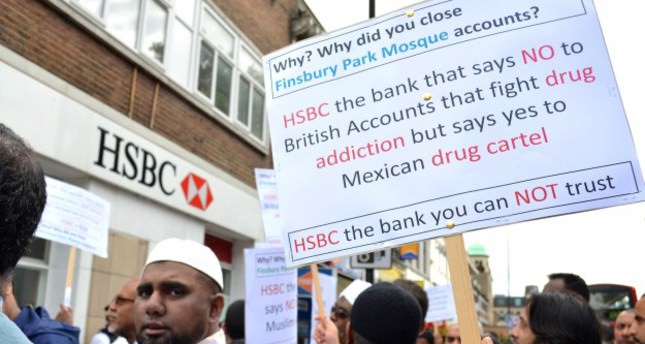 by AA Aug 16, 2014 12:00 am
LONDON— Protestors gathered outside a London mosque on Friday to protest against a notice by HSBC bank to close the mosque's bank account.
Finsbury Park mosque received a letter from the bank this month telling the trustees that HSBC was closing the account because it was not within the bank's "current risk appetite."
In the letter, the bank said: "In deciding whether to close accounts, we take into account factors such as the nature of the customer's activities, the jurisdiction in which the customer operates and the nature of the products and services the customer utilizes."
The mosque, in north London, is not the only Muslim organization to face such an account closure. International development charity the Ummah Welfare Trust and the think-tank Cordoba Foundation also received similar letters last month, which gave a two-month notice period.
Lawmaker Jeremy Corbyn, who was at the demonstration and who represents the district, said the mosque was a "very good community mosque."
He added: "It's very damaging for the mosque and a very unwise and shortsighted decision by the bank."
Corbyn also said he had asked the equalities commission to investigate the policies of HSBC in relation to the Muslim community.
Mosque trustee Khalid Oumar said they were seeking legal advice.
Demonstrators held placards and chanted "HSBC, shame on you." Bus driver Hassan Ali, 35, said: "We want to know the reason why they've
closed the charity accounts. There are a lot of Muslims that have invested money in the bank and they are treating the Muslims very bad."
The mosque was hijacked by radical cleric Abu Hamza in the late 1990s until he was kicked out in 2005. He was convicted of terrorism offences in the United States in May.
Oumar said: "We have made great strides over the past 10 years in terms of social cohesion."
In a statement, the Ummah Welfare Trust urged its supporters to write to the bank and consider a boycott.
"If HSBC persists on punishing a charity for working in Gaza then we request you make a moral and ethical decision by taking your business to other banks," the trust added.
The Cordoba Foundation which, according to its website, is an independent think-tank promoting "intercultural dialogue and positive coexistence among civilizations," said its founder and chief executive Anas Altikriti and members of his family were also given notice that their accounts would be closed.
Altikriti is a prominent pro-Palestinian activist and has been accused of membership of the Muslim Brotherhood, something he has denied.

An HSBC spokesman told The Evening Standard newspaper: "We do not discuss relationships we may or may not have with a customer... HSBC has comprehensive rules and policies in place to ensure race or religion are never factors in decisions we make."
Last Update: Aug 16, 2014 5:58 pm
RELATED TOPICS