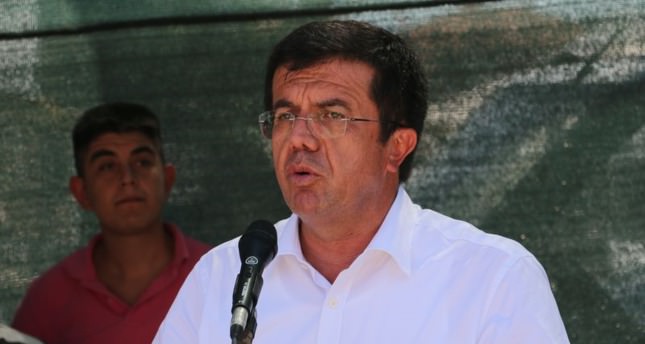 by Daily Sabah Aug 16, 2014 12:00 am
ISTANBUL— Minister of Economic Affairs of Turkey Nihat Zeybekçi, has responded firmly to recent statements made by Moody's, a renowned credit rating agency, warning Turkey on uncertainty due to presidential elections. Zeybekçi, "The recent 'concern' made by Moody's is not related to Turkey's economical conditions, thus as a nation we will not take this 'warning' seriously," said on Saturday in Turkey's western Denizli province.

"While the European Union economical crisis in 2008 caused 5 million people to loose their jobs, Turkey's on the other hand has created employment for more than 5,5 million people during same period. Turkey's current account deficit decreased by 35% percent, and foreign trade deficit decreased by 30% percent since last year and unemployment rate has decreased to 8.8%. Moody's didn't mention any of these developments in Turkey's economy and we do not expect them to do so," he said.

Moody's, a renowned credit rating agency has recently made a statement regarding the presidential elections in Turkey. Moody's said that the recent presidential elections would not change basic economic and institutional conditions of Turkey. The credit rating agency added that the uncertainty in Turkey would remain, causing country towards potential shifts in international market sentiment.
Last Update: Aug 16, 2014 11:47 pm
RELATED TOPICS