Argentina defends plan to pay creditors outside US 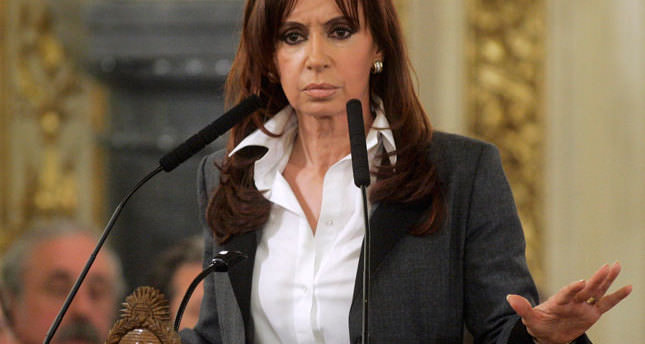 by Associated Press Aug 22, 2014 12:00 am
Argentina will make its next round of scheduled debt payments, the economy minister said Wednesday as he defended a new plan to pay creditors locally and avoid the jurisdiction of a U.S. court that forced the country into default last month. Under legislation that still must be submitted to Congress, Argentina will no longer use the Bank of New York as a trustee for about $30 billion in bonds and will service debt through its own central bank, Economy Minister Axel Kicillof said.

The change will allow the country to make $200 million in interest payments scheduled for Sept. 30 to bondholders who voluntarily accept the change, Kicillof said a day after President Cristina Fernandez announced the plan. "It's a way for us to continue meeting our commitments," he said.

The economy minister sought to minimize the scope of the plan, saying it amounted to "a change of venue, not jurisdiction," but it could allow the country to emerge from default while complicating a bitter legal dispute with U.S. investors. The proposal is intended as a way around a U.S. court order that blocked Argentina from making $539 million in interest payments on July 30, triggering the country's second default in 13 years.
U.S. District Judge Thomas Griesa, whose order prevented Bank of New York from distributing Argentina's interest payments until the country settles a decade-long battle with other creditors, has warned that changing the jurisdiction of payments would have "serious legal consequences."

Government officials, who have bristled at what they see as an attack on its sovereignty by the U.S. courts, say Argentina isn't really in default since it has attempted to make the interest payments but was barred from doing so. Kicillof noted the country has reserves of $29 billion on hand. "There is no default. We are going to keep paying," he said. The new local payments would apply to bondholders who accepted lower-value bonds following the country's 2001 default and could further complicate the battle with holdout creditors.

Congress is expected to pass the bill since the holdout creditors are reviled in Argentina as "vultures" who have sought to undermine the country's sovereignty by battling in the U.S. courts for full payment on the previously defaulted bonds. The holdouts argue that Argentina voluntarily issued the original bonds under U.S. laws to help attract investors. One of the holdout creditors, Aurelius Capital Management LP, issued a statement blasting the new strategy as an "evasion plan" that is in violation of a court order upheld by the U.S. Supreme Court.

Argentina's 2001 default on more than $100 billion was at the time the largest sovereign debt default in history and is at the heart of the legal dispute behind the latest default. A minority of creditors, led by a New York-based hedge fund, refused to accept deeply discounted exchange bonds and obtained a U.S. court order requiring the South American government to pay them in full, a total of about $1.5 billion.
Last Update: Aug 22, 2014 1:50 am
RELATED TOPICS