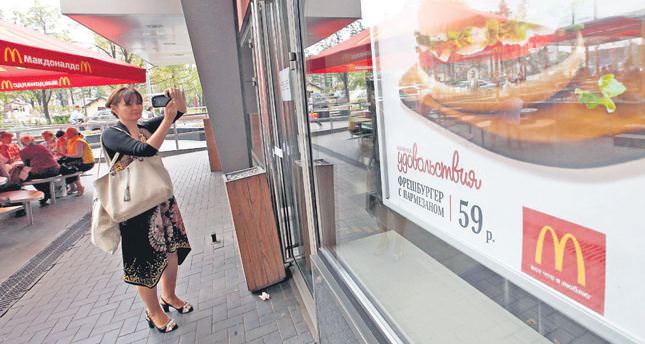 Russia's consumer watchdog has shut 4 McDonald's restaurants in Moscow as part of an investigation into food standards. Closures come amid rising tensions between Russia and the West over the crisis in the Ukraine

Russia ordered the temporary closure of four McDonald's restaurants in Moscow on Wednesday, a decision it said was over sanitary violations but which comes against a backdrop of worsening U.S.-Russian ties over Ukraine. The four restaurants ordered to suspend operations by the state food safety watchdog included the first ever McDonald's in Russia, which opened in the last days of the Soviet Union, and which the company says is its most frequented in the world. On Wednesday evening, the lights were off inside the restaurant - which is usually crammed with diners - and a sign on the door said it was shut "for technical reasons."

The watchdog, known in Russia as Rospotrebnadzor, said in a statement inspectors had found numerous sanitary violations. A source at the watchdog said it had sealed off parts of the restaurant premises. Asked if the decision was a retaliation for the United States and other countries imposing economic sanctions on Moscow over the crisis in Ukraine, the source declined to comment and referred to the statement about sanitary violations. McDonald's Russian unit said in a statement: "We are studying the essence of the claims to determine the steps necessary to open the restaurants for the customers as soon as possible." Russia's first McDonald's opened on Moscow's Pushkin Square in 1990, when it was viewed as a sign that, under reformist Soviet leader Mikhail Gorbachev, Cold War tensions with the United States were starting to thaw. It was hugely popular with Russians; long queues formed outside and some people even had their wedding receptions there.

Another of the restaurants closed on the orders of the food safety watchdog is on Moscow's Manezh square, under the walls of the Kremlin where President Vladimir Putin has his offices. It became clear last month that McDonald's was under heightened scrutiny from the Russian state, when the watchdog said it had identified violations in product quality that raised questions about the safety of food across the chain. McDonald's said at the time it had not received any complaint from the regulator and had no information about the lawsuit.

Foreign food producers who have fallen foul of the watchdog in the past have accused it of acting in the political interests of the Kremlin, an allegation it denies. The watchdog banned Georgian wine as Tbilisi strengthened ties with Washington and spirits from Moldova after the former Soviet republic boosted its drive to partner with the European Union.

Janusz Piechocinski, the deputy prime minister of Poland, said last month that a decision by the watchdog to ban most Polish fruit and vegetable imports was an act of "political repression" by the Kremlin. McDonald's operates 438 restaurants in Russia and sees the country as one of its top seven major markets outside the United States and Canada, according to its 2013 annual report. Europe contributes about 35 percent of McDonald's global operating profit. The company does not give a country-by-country breakdown. Earlier this month Russia banned all meat, fish, dairy, fruit and vegetable imports from the United States, the European Union, Norway, Canada, and Australia for one year in retaliation for the sanctions imposed by these countries over Ukraine.

However, some of these restrictions were eased on Wednesday to allow the import of some items that are useful to its own food and agriculture industries, such as vegetables for planting and hatchlings of salmon and trout. In the mean time, Russia's food safety watchdog is conducting unscheduled checks at McDonald's restaurants in the Ural mountains region of Sverdlovsk, it said yesterday. "Checks were started due to complaints" from customers, Natalya Lukyantseva, an official in the Sverdlovsk region office of the regulatory agency, known in Russian as Rospotrebnadzor, told Reuters.