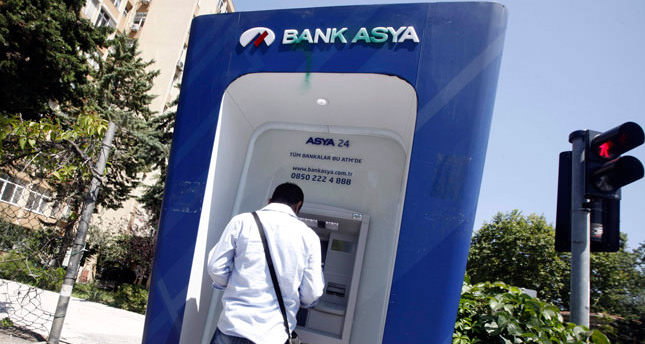 by Daily Sabah Aug 23, 2014 12:00 am
A major shareholder of Bank Asya is accused of insider trading for capitalizing on his knowledge to trade away his shares of the Gülenist bank and illegally earning millions of dollars.

Insider trading operations of the controlling partners of Bank Asya, which belongs to the main actor of the Dec. 17 coup attempt - the Gülen Movement, have been exposed. It was determined that Hasan Sayın, who is one of the privileged shareholders of the bank traded millions of dollars on the stock exchange right before it was announced that Bank Asya was negotiating with Qatar Islamic Bank (QIB). The Capital Market Board (SPK), which is investigating the insider trading claims, is now getting ready to file a criminal complaint. According to the information received on March 19, the management of Bank Asya invited the holders of 290 privileged shares of the bank to discuss partnership options with the QIB. Ali Akbulut, Ömer Faruk Berksan, Nurettin Eroğlu, Şevki Kavurmacı, Hasan Sayın and İhsan Kalkavan were also among the other names invited. Information on the negotiations with the Qatari bank were leaked to the main shareholders.

Hasan Sayın, who owns 3.92 percent of the qualified shares, equaling TL 360 million, and İbrahim Sayın profiteered in the market as soon as they were informed of the meeting. It was determined that both of them traded millions of Bank Asya shares on March 18. Shareholders who were informed that negotiations would start with QIB began purchasing Bank Asya shares and thus gained quick profits. The price of Bank Asya shares was TL 1.14 on March 18. Bank Asya informed the Public Disclosure Platform about the negotiations on March 25 which resulted in the price of the shares to surge by 47 percent in 4 days, rising to TL 1.63. The increase within a week was 65 percent.

Insider trading is defined as "through affecting capital market instruments, using information that has not been disposed to the public for the interest of its own or of third persons; to obtain unlawful profits or to eliminate a loss through destroying equal opportunities of the players in the capital market or to disqualify." The complaint will be filed against the controlling partners in accordance with the Capital Market Board Code no. 6362.
Article 106/1 of the Code regulates transactions and trading after being informed of information that has not been publicly disclosed; in other words, insider trading. The code imposes two-to-five years imprisonment or punitive fines for those who give purchase or sale orders for capital market instruments based on confidential information.

SPK is now investigating the transactions performed by other partners that have attended the meeting on March 19. The controlling partners of Bank Asya, of which 53.7 percent is public, also eliminated small investors through insider trading. The expert also noted that small investors might also earn the right to file claims. Russia's countermeasures against the EU and U.S.' economic sanctions since the Ukrainian crisis have paved the way for an increase in Turkish exports.

Turkey has taken the first concrete steps to establish a free trade zone between Russia and Turkey. While a committee is being set up, the first negotiations are scheduled to start in September. Economy Minister Nihat Zeybekçi on Friday noted that Turkey is planning to become a part of the economic cooperation between Russia, Belarus, Kyrgyzstan, Azerbaijan and Kazakhstan. "We are not looking to establish a customs union, we prefer concluding preferential trade agreements," said Zeybekçi.
Last Update: Aug 23, 2014 2:39 pm
RELATED TOPICS