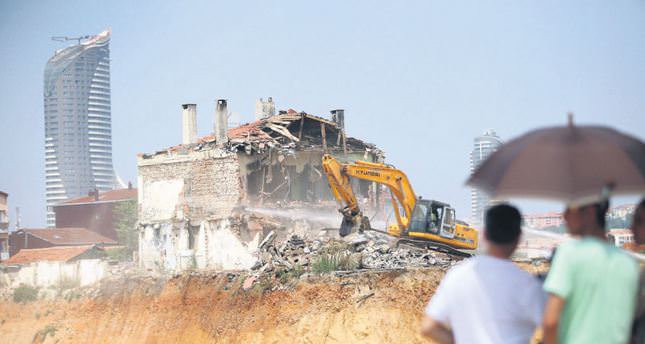 While urban transformation in slum areas and non-earthquake-resistant neighborhoods proceeds, people are divided on its social and psychological effects to residents

The Fikirtepe neighborhood on Istanbul's Asian side is one example of this rampant process that has characterized Turkey since the 1950s. An area at the center of a major three-year building project, this breakneck "urban transformation" as it is sometimes euphemistically known - still divides residents as to whether the process means integration or migration.

Former Fikirtepe people say that gentrification not only changes the profile of cities, it also changes the profile of the people and life in the area. Fikirtepe, formerly made up of skilled-working-class neighborhoods, is awaiting a variety of luxury high-rise towers, containing 50,000 apartments. More than 6,300 houses were demolished as part of the project. The ministry claims that only 3.2 percent of these were in good condition, defined as being "earthquake resistant." "Everybody lost something here: maybe their home, maybe their job, childhood or the best times of their life ... Along with the district, which was wiped out of Istanbul, neighborliness and brotherhood that ensures the protection of the elderly, needy and the poor has also disappeared," said 45-year-old resident Beysim A. Beysim worries about the changing character of the area brought about by this profound transformation. "I think I am really lucky because I have 300 square meters near the Dumlupinar neighborhood and will get six flats in exchange for my land.

It means I will gain a million dollars. But nothing will be the same as it was before the gentrification," he said. When Beysim moved to another apartment as part of the transformation, his father passed away. Beysim complained: "Although I moved five kilometers away to another flat in Kadiköy, all of my former neighbors visited me. However, the new ones did not even ask 'what's happening here; is there any problem?' Actually, I miss the old days." Beysim also has concerns about the financial stability of the three-year plan. He said, "The project seems perfectly profitable, but no one can guarantee what will happen." He laughs and adds, "I hope the hunter won't become the hunted."

Metin E, a 55-year-old landlord, has been living in Fikirtepe for five decades. He claimed the changes have "torn apart" his family after rising land prices triggered a dispute. Having renovated a five-storey rental building on 180 square meters over 10 years, Metin could see at least three 50-meter apartments built on his land. However, a family dispute among his five siblings erupted after the value of the land changed. "All my siblings know that my father left this land to me, but the rumors about the income of the gentrification of my land misled them. This land belongs to me not to them," Metin said.

Many people, unsure and ambivalent about this process of rapid change, have founded associations to counsel and support residents uncertain about the future.

Ercüment Oruç, head of the Fikirtepe Social Solidarity Association, said they founded the group to protect inexperienced landowners from being deceived by what he calls "the double-dealers" - a pointed reference to realestate firms. "Some real estate companies offer false hopes to the people in the transformed areas.

And the people in those areas call them 'double- dealers' who fool people by 'apparently' offering more flats in return for their small land," Oruç said.
Oruç said: "However, after they have the landowner's signature, they just vanish. They fool people into buying their house for a song and then sell it more expensively to the large real-estate companies."

Interviewing to a reporter from Turkish newspaper Sabah, the president of TOKİ, the Housing Development Administration of Turkey, Mehmet Ergün Turan, stated that buildings that are risky, that are physically worn out and that have completed their constructional life are one of the major problems of Turkey since such buildings are a threat to the security of life and property of Turkish citizens living in such buildings. He further noted that such buildings are a threat to the healthy development of cities.

Burhan Özdemir, a contractor and chairman of the Independent Industrialists and Businessmen's Association's (MÜSIAD) Construction Sector Commission, spoke to Daily Sabah on the matter. "People living in this area [Fikirtepe], are generally immigrants from Anatolian cities and they could not adapt to the life in the metropolis. Immigrants from the same Anatolian cities started to live in the same neighborhoods and caused the formation of living spaces incompatible with the urban spirit in the city." said Özdemir. Özdemir highlighted new generation's discontent about this situation.

"The children of the families living in these areas are relatively well-educated. They are mainly university graduates and have respectable jobs. They cannot accept that their families live in the slums. In fact, they rebel at their identities. They do not want to go and live in those neighborhoods, which causes inconformity in the family. We not only present much more secure and modern living spaces to families but also support the social harmony inside the family." he stated.

The ruling Justice and Development Party aims to oversee $400 billion (TL 873.77 billion) worth of urban transformation in Turkey by 2023. According to the Ministry of Environment and Urbanization, over 1.4 million people were exposed to gentrification in Turkey in 2013.
Last Update: Aug 23, 2014 2:10 am
RELATED TOPICS